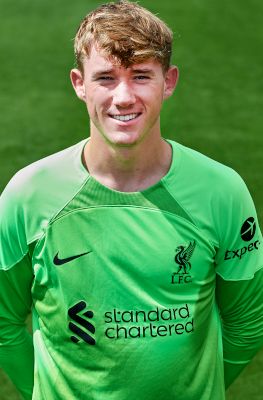 Northern Ireland U21 goalkeeper Liam Hughes arrived at Liverpool from Glasgow Celtic in January 2021 and signed a new deal with the club later in the year.

He then spent the second half of the 2021-22 campaign on loan at Stalybridge Celtic.

Hughes made his senior league debut for Portadown at the age of 15, before joining Dungannon Swifts and then Celtic in February 2018.

He is part of the Reds' U21s squad and enjoyed a memorable start to his Liverpool career a month after his arrival.

Having made his Premier League 2 debut for the U23s and kept a clean sheet during a 4-0 win over Arsenal, Hughes was named on the first-team bench for the 2-0 win at Sheffield United the next day.