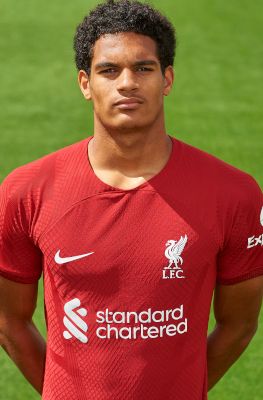 Jarell Quansah is a stylish centre-half who signed his first professional deal with the Reds in February 2021.

After captaining the U18s team to the FA Youth Cup final in 2021, Jarell featured regularly for the U21s and in the UEFA Youth League before joining Bristol Rovers on loan in January 2023.

Jarell, who hails from Warrington, has been at the Academy since the age of five.

An England U19 international, he is comfortable on the ball and is blessed with great pace.

In the 2021-22 season, Jarell was twice an unused substitute for the senior Reds team, against Tottenham Hotspur in the Premier League and Leicester City in the Carabao Cup.

He ended the campaign by playing a major role as England won the UEFA U19 European Championship.

Jarell featured in every game at the summer tournament and scored in the semi-finals and provided a crucial assist in the final as the Young Lions beat Israel 3-1.