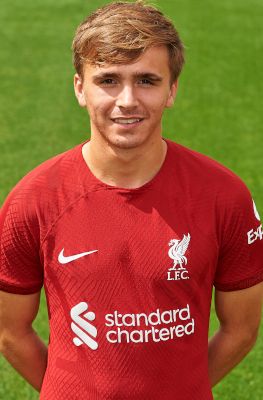 James Norris is an energetic left-back who can also play in midfield.

The Scouser has been at the Academy since U9 level and is also an England U19 international.

Possessing a great work ethic matched with a sweet left foot, Norris loves to get forward and support the attack.

James made his senior debut for the club when he came off the bench at Aston Villa in the League Cup in December 2019.

Norris signed his first professional contract with the Reds in the summer of 2020 and in August 2021 he was awarded a new long-term deal with the Reds.

He enjoyed another promising campaign in 2021-22, featuring for the first team and netting a stunning winner for the U23s as they lifted the Lancashire FA Senior Cup with a 1-0 win over Burnley.