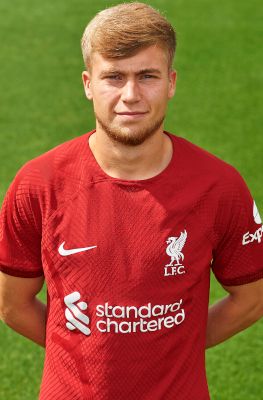 Jack Bearne was signed in April 2017 from Notts County and is currently on loan at Kidderminster Harriers for 2022-23.

An exciting talent, Jack is at his best when playing on the right side of the forward line.

In the 2018-19 season, Bearne was part of the victorious FA Youth Cup squad as he netted a penalty during the dramatic shootout win over Manchester City in the final.

He also had the distinction of hitting winners in both of the mini-derby successes over Everton during the campaign.

After missing the start of 2019-20 through injury and then featuring for the U23s, Jack made his senior debut for the club when he came off the bench at Aston Villa in the League Cup in December 2019.

He signed his first professional contract with the Reds in October 2019 and became a regular with the U23s in 2021-22, enjoying a brilliant spell just after Christmas when he netted 11 goals and provided numerous assists.

In the early weeks of the 2022-23 season, a loan deal was agreed for Bearne to spend the remainder of the term with Kidderminster in National League North.

Click here to read more about Jack in our Meet the Academy feature.