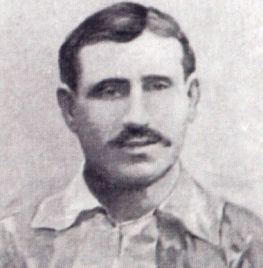 Sam Raybould established himself quite late on the League scene after playing with a string of amateur sides.

He was 24-years-old when he scored no less than 10 goals in 13 games in half a season for Second Division New Brighton Tower, before stardom at neighbours Liverpool.

Sam was the first player to score 100 league goals for Liverpool, a feat he achieved in 170 First and Second Division matches between January, 20th 1900 and December 30, 1905.

Raybould was top-scorer with 17 when Liverpool won the League Championship for the first time in 1901 but his most prolific period came two years later when he grabbed 32 goals from 34 league and cup games.

After becoming the first Liverpool player to score 30 goals in one season, Sam got himself in trouble with the football authorities by agreeing to 'financial inducements' to sign for Southern League Portsmouth.

The Southern League was the dominant competition in Southern and Central England outside The Football League.

When The Football League was founded in 1888 it was based entirely in the North and Midlands with the establishment of County Football Association's in the South being firmly opposed to professionalism. Portsmouth tried to use lack of regulations of transfers between the leagues to their advantage, but their approach was deemed as illegal and Sam Raybould was suspended for seven months for agreeing to sign for Pompey.

He was also given a lifetime ban on ever signing for Portsmouth.

His absence proved significant as Liverpool slumped from fifth place a year before to be surprising relegation candidates. Sam's ban lasted until January 1904, but he seemed to have been forgiven for wishing to move to Pompey as he was selected for the first team straight away.

Even Sam's four goals from 15 games towards the end of the season could not prevent the dreaded drop into the Second Division.

Sam scored 19 league goals as the club made an immediate return to Division One and made a significant contribution when the First Division title was won just a year later by scoring 10 goals in 25 matches.

The last of Sam's 211 league appearances for Liverpool came on the final day of the 1906-07 season at home to Sheffield United and he marked the occasion in typical fashion with a goal, the last of the 129 he scored for the club.

Even though for being such a sensational goalscorer for Liverpool he never played for the English national team, but featured three times for the Football League XI which played the Scottish League XI.

32-year-old Raybould left Liverpool in 1907 for First Division Sunderland. He scored 10 goals in 27 league games in the 1907-1908 season keeping Sunderland just above the relegation places.

After only one season he went to fellow 1st division team, Woolwich Arsenal, and scored six goals in 26 league games for sixth placed future Gunners before going down a couple of divisions to guide Chesterfield Town to the Midland championship, scoring 14 goals in 47 games in his two years there.