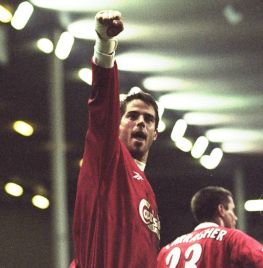 Despite his Liverpool career being hampered by injury problems, Jamie Redknapp will be remembered as one of the most popular players to ever serve the club.

Kenny Dalglish’s last major signing as manager in January 1991, Redknapp began his career under the watchful eye of his father, Harry, at AFC Bournemouth.

He was only 17 when he arrived at Anfield and the £350,000 fee was one of the highest paid for a teenager at the time. Nine months later he became the youngest Liverpool player to appear in European competition when he made his Reds debut against Auxerre in the UEFA Cup.

Redknapp went on to establish himself as a regular in the centre of midfield during the managerial reign of Graeme Souness and, after clinching a Coca-Cola Cup winner’s medal in 1995, gained his first England cap. After playing a brief part in Euro 96, injury unfortunately ruled him out of both the France 98 World Cup and Euro 2000.

At the start of 1999-2000 he was named Liverpool captain but a knee injury forced him to sit out the majority of the campaign and in a bid to cure his long-standing injury troubles he underwent knee surgery in America.

He missed out on the memorable climax to the 2000-01 treble-winning season but, as club captain, he went up to receive the FA Cup with Robbie Fowler at the Millennium Stadium in Cardiff.

Redknapp made his comeback from injury during the pre-season tour before the next campaign; however, just when it looked like he was back, injury struck again.

The midfielder fought back to fitness once more, but the end of his Liverpool career was in sight. In October 2001 he played and scored in a 2-0 win at Charlton Athletic. It was to be his last start for the club.

It was a sad day when he severed ties with the Reds in April 2002, joining Tottenham Hotspur on a free transfer, though he departed with the best wishes of teammates and fans alike.

Redknapp later moved on to play for his dad at Southampton during the 2004-05 season, before he was forced to retire from the game due to injury.