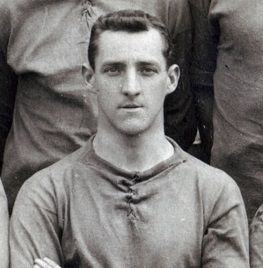 Arthur Goddard was a fantastic servant to Liverpool being a regular scorer from his position on the wing for nearly a decade and a half at the start of the 20th Century.

He was given his debut at Wolverhampton on 8th March 1902 and that started a run of 11 successive matches until the end of the season, in which he scored twice.

Goddard established himself in the side over the next two seasons, missing only one league match in each and scoring a total of 18 goals.

In 1904-05 he won a Second Division championship medal and followed that up by being part of the team that won the League championship a year later, when he was the only ever-present in the side.

Goddard continued to play consistently, averaging over 30 league appearances for the next seven years. He was appointed captain of the side in the 1909-10 season and lead by example as Liverpool finished 2nd in the League which was their best league placing since winning the championship in 1906.

Goddard contributed more to the goalscoring than in previous years going into double figures for the first time since 1903.

1913-14 proved to be his final season at Anfield as he lost his place in the Autumn after figuring in 10 of the opening 11 fixtures and only played once more before his contract was not renewed and he made a free transfer to Cardiff City.