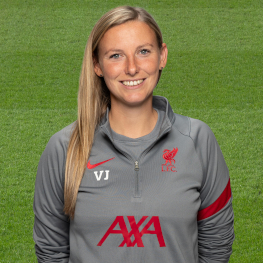 She took charge of the Reds after almost a decade with the club in a variety of roles, beginning with the position of LFC Foundation’s programme lead in women and girls’ football in 2009.

During her seven years with LFC’s official charity, she simultaneously widened her coaching experience, starting out with the U11s and progressing at the Girls’ Centre of Excellence.

The former Macclesfield Town Ladies player served as LFC Women’s development squad manager for five years and then as a first-team analyst for two years, while also working as a level one coach educator at the Football Association and as a coach with England U17s.

Vicky’s dedication and talent was acknowledged with a nomination for the FA Female Development Coach of the Year award in 2014 – and she went on to win the accolade 12 months later.

She was appointed assistant manager to Neil Redfearn before taking over as caretaker manager and then being installed as permanent LFC Women manager in October 2018.

The Reds ended the 2018-19 Women’s Super League season in eighth but would suffer the disappointment of relegation – decided on a points-per-game basis – when the following campaign was curtailed due to the COVID-19 pandemic.

Jepson is now aiming for an immediate return to the top flight with promotion the objective as LFC Women compete in the FA Women’s Championship in 2020-21.