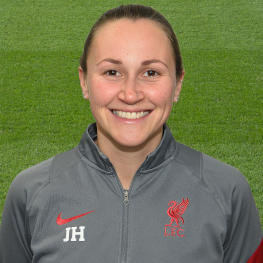 Jen Herst joined Liverpool FC Women in the summer of 2019 after spending the previous season with Everton Women as goalkeeping coach and acting as interim manager for a month.

She had previously spent two years with Manchester City Women as a goalkeeper coach, assisting the first-team coach as well as working with the development squad and academy.

Warrington-born, her coaching career began at the Liverpool Centre of Excellence in 2008, coaching the U10s and working her way through the age groups before specialising in goalkeeping.

She worked with the development squad which won the FA Youth Cup in 2014, a year which also saw her named the FA’s Female Development Coach of the Year.

She holds a UEFA A goalkeeping badge, just the second woman in the country to hold it, and has worked within the England set-up since 2013, currently coaching with the U17s.