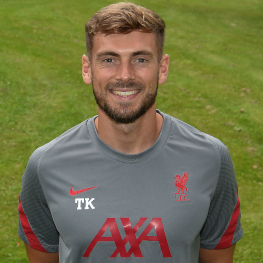 Tom King is part of the first-team set-up at Melwood, holding the position of fitness coach.

Tom took on a full-time role with the Reds in the summer of 2019 after three seasons with the club as a PhD student working with the fitness department.

He initially joined the club ahead of the 2016-17 season after completing an undergraduate degree in sports science at Liverpool’s John Moores University between 2013 and 2016, during which spent time with city rivals Everton as an intern.

Now with the club on a permanent basis, typical duties include pre-training work with the first-team squad, which includes gym injury prevention and athletic development, helping to deliver warm-ups, individual conditioning sessions and post-training analysis and feedback via GPS and HR data collection.

In addition, Tom continues to work as a PhD researcher at LJMU and is currently preparing a thesis on ‘hip extension strength’.