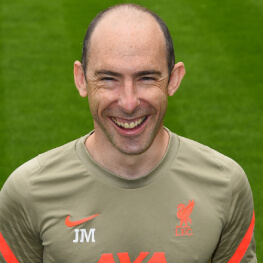 Jim Moxon joined Liverpool FC as the head of sports medicine and fitness at the Academy in the summer of 2016, before moving to Melwood in 2020 in the role of club doctor.

Jim began working in professional football in 2008 at Sheffield Wednesday, where he was involved in covering the academy team and development squads. In 2011, Jim joined Chesterfield FC and was responsible for the care of the first team.

In 2012, he was part of the medical team at the aquatic centre during the London Olympics. He was appointed as chief medical officer at Sheffield United in 2013 and was responsible for first team and academy medical care until leaving to join Liverpool in 2016.

Jim also has extensive experience of the medical demands of rugby league and has worked for Hull Kingston Rovers for four seasons.

In 2020, Jim moved to Melwood to work with the first team and played a crucial role in the clubs handling of the COVID-19 pandemic and subsequent return to football protocols. He is a member of a medical advisory group to the Premier League advising on ‘project re-start’ and COVID-19 protocols in football.

He has a Masters degree in Musculoskeletal Ultrasound and is currently involved in research regarding ultrasound elastography. He is a visiting lecturer at Birmingham University and Manchester Metropolitan University and a sports medicine career champion for Edge Hill Medical school.

In his spare time, Jim is a keen runner and mountain biker, and is currently preparing for ‘Man V Lakes’ race in 2021.