Ben Woodburn became the youngest goalscorer in Liverpool Football Club’s history when he struck against Leeds United in a League Cup quarter-final tie on November 29, 2016.

In just his second appearance for the senior side, the forward came off the substitutes’ bench in the second half of the Anfield fixture – and was on the pitch for 14 minutes before striking.

In doing so at the age of just 17 years, one month and 14 days, Woodburn broke Michael Owen’s 19-year record in becoming the youngest scorer in the Reds’ history. 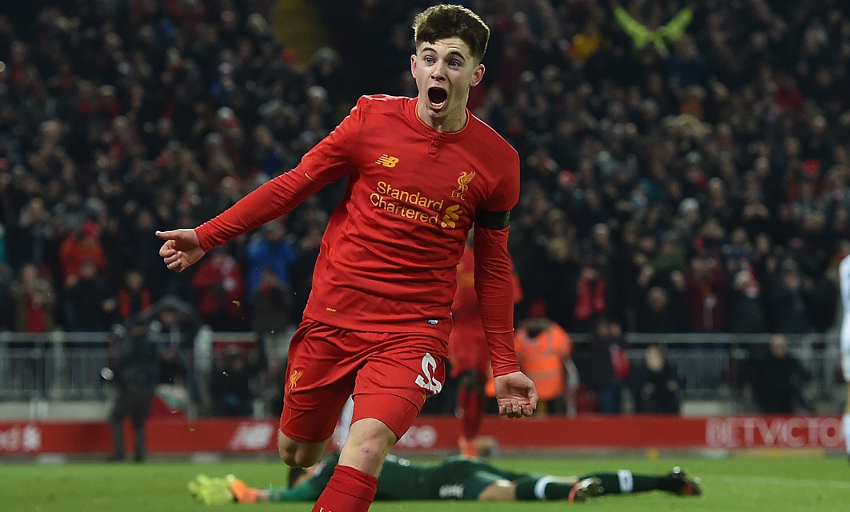 He initially joined the club’s Academy as an U7 player and is capable of playing anywhere across the frontline.

At the start of 2016-17, Woodburn played in several first-team pre-season friendlies. A senior debut soon followed when he appeared as a substitute against Sunderland in November, just three days before his historic Kop-end goal against Leeds.

Woodburn tallied a total of nine first-team appearances for Liverpool in 2016-17, including five in the Premier League. A successful term also ended with him being named as the club’s Academy Player of the Year and earning a senior call-up to the Wales squad.

In the summer of 2017, the Nottingham-born starlet continued to impress during the Reds’ pre-season programme – and in September of that year, he was to create headlines around the globe.

Coming on as a substitute in a World Cup qualifier with Austria in Cardiff, Woodburn marked his international debut with a sublime 25-yard strike to give the Dragons a 1-0 victory.

Then, on October 25, the No.58 put pen to paper on a new long-term contract with Liverpool to continue his fairytale journey.

After a campaign of limited first-team opportunities, Woodburn joined Championship side Sheffield United in August 2018 on loan.

He returned to Melwood in January 2019, and then signed for Oxford United on a season-long loan deal ahead of the 2019-20 campaign.

Having helped Oxford reach the final of the League One play-offs, Woodburn went on to join Blackpool in a loan deal in October 2020 and would rejoin the Reds in January 2021.

He featured for Liverpool's first team during the pre-season of 2021-22 before joining Hearts on a season-long loan on August 23.