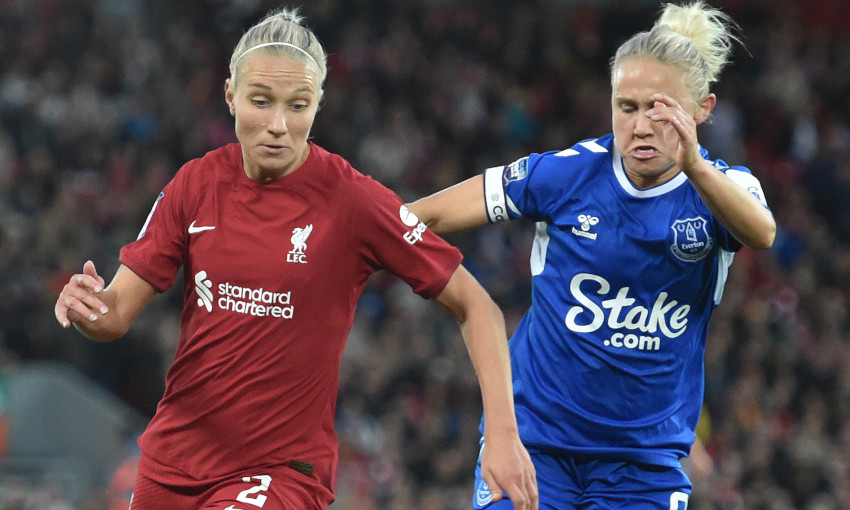 Liverpool FC Women were beaten 3-0 by Everton in Sunday's Merseyside derby at Anfield.

First-half goals from Megan Finnigan and Jessica Park gave the Blues an advantage in the much-anticipated Barclays Women’s Super League clash, which was played in front of a crowd of 27,574.

A late strike by Hanna Bennison confirmed defeat for Matt Beard’s team, who were thwarted in their attempt to follow up the season-opening win over Chelsea last weekend.

The visitors made a confident start to proceedings and threatened within six minutes as, when a short corner from the right was kept alive around the back post, Gabrielle George flicked a header just over the Liverpool goal.

Next, Finnigan fired in a dangerous drive from around 25 yards that Rachael Laws had to move across and carefully tip over at the Kop end.

But from the resulting set-piece, the first headed challenge sent the ball looping into the air inside the Reds area and Finnigan got to it with a strong header into the bottom right corner for 1-0.

Everton’s control of possession was limiting the home side’s opportunity to gain rhythm in the game, though high pressing from Katie Stengel created a chance on 26 minutes.

The American striker, last weekend’s match-winner against Chelsea, won the ball from Rikke Sevecke high up the pitch but slight hesitation as she weighed up her options allowed the Blues to crowd her and a left-footed finish drifted over.

The away team then doubled their lead just past the half-hour mark. Nathalie Bjorn clipped a pass over the top for Park to scamper onto and she feigned to shoot before taking the ball around Laws and slotting in.

Liverpool’s best chance of the half landed to Ceri Holland five minutes before the break, the midfielder swerving a finish the wrong side of the right post after a penalty box scramble sent the ball her way.

Everton threatened again when Katja Snoeijs traded passes with Izzy Christiansen but touched the ball wide upon receiving the return in front of goal.

Beard introduced Rachel Furness at the outset of the second half and Yana Daniels worked an opportunity soon after following her onto the pitch from the bench.

Daniels drove in from the left channel, her pace opening up space on the troublesome run into the area, though her strike flashed into the side-netting from a narrow angle.

Neither side was able to cause their opposing goalkeeper much in the way of genuine concern, however, with Furness seeing a lofted cross-shot taken by Courtney Brosnan.

Brosnan spared her own blushes late on as Furness and Stengel competed to get a touch on a delivery from the left. The ball spooled out and over the Everton ’keeper’s attempt to catch, but she collected before it could cross the line.

As Liverpool pushed to make a mark on the scoresheet, Everton got their third on the counter-attack, Park teeing up Bennison to convert a low shot despite Niamh Fahey’s efforts to clear.

Furness had a header frustratingly deflected wide from Holland’s set-piece, an unmarked Daniels prodded straight at Brosnan and Stengel headed over, as a special occasion ended in disappointment for the Reds.

LFC Women’s focus will turn to the Continental League Cup next weekend, with a trip to Sunderland on Sunday October 2 their first fixture of the group stage.