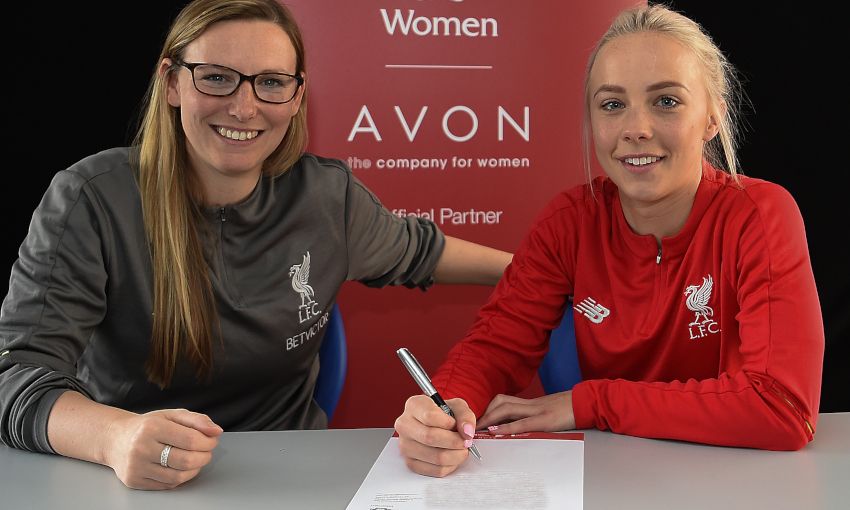 Ashley Hodson has committed her future to Liverpool FC Women by agreeing terms on a contract extension.

The 23-year-old forward, a graduate of the club’s centre of excellence, returned to action in February after overcoming a long-term cruciate ligament knee injury.

Hodson has played 75 games for LFC Women since breaking into the first team back in 2014 as the Reds secured a second successive Women’s Super League title and has also earned international honours with England U23s.

“It’s great to be back fit and I’m over the moon to sign a new contract,” she said.

“This is the only place I’ve been in my career and I’m delighted to stay. I still need to get some match fitness and as a team we want to get maximum points from our remaining games this season.

“I feel next season is a big season for me and I hope I can push on to be the best I can be.”

Hodson joins Jess Clarke and Niamh Charles as Reds who have recently extended their contract with Vicky Jepson’s team.

“Vicky is putting her own stamp on the team and everyone believes in what she’s doing,” she continued.

“We’re hoping that going into next season we can really blossom as a team and show how good we really can be.”

LFC Women manager Jepson is equally pleased to have secured the services of a player she has worked with for many years.

“Ash has shown true resilience with the injury she picked up. She’s worked so hard to get back on the field and it’s been great to have her back,” said Jepson.

“Ash has been part of the team for a very long time coming through our youth section and for me it’s another tick to get her over the line and in our squad for next season.”

Photos: LFC Women in training ahead of season finale