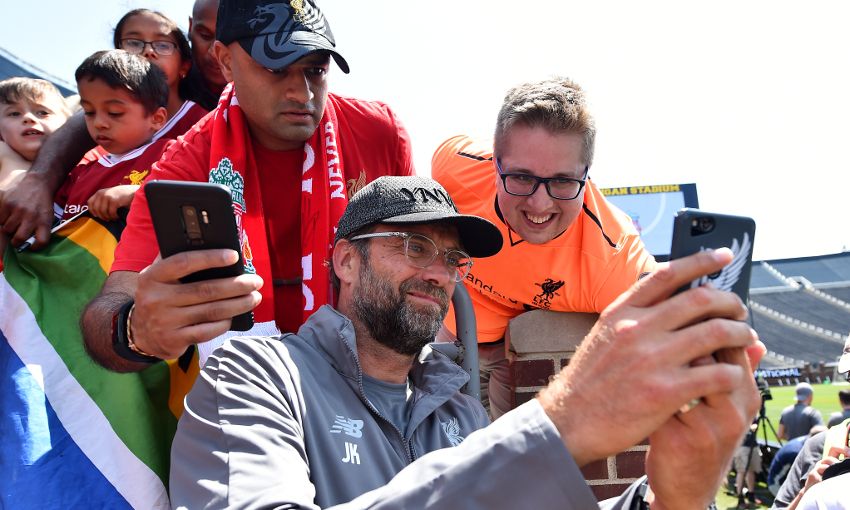 With Liverpool's pre-season tour of the United States now completed, take a look back at five talking points from a memorable trip across the pond.

From impressive Academy prospects to unforgettable nights with American fans, there were plenty of standout moments during another successful Stateside sojourn.

Here are our highlights from the club's stay...

The kids are alright

Jürgen Klopp has proven time and time again that he isn't scared of putting his faith in young players, and the German has been handsomely rewarded for that approach this month. Curtis Jones, Sheyi Ojo, Ben Woodburn, Rafael Camacho, Pedro Chirivella, Nathaniel Phillips Caoimhin Kelleher and Kamil Grabara were all included in the 29-man squad that headed Stateside, and every single one performed impressively during the Reds' stay.

After Sunday's win over Manchester United, a clearly proud Klopp said: “Sheyi [Ojo] is a really confident boy as he showed tonight, not only around the penalty when he sent Daniel Sturridge away! You have to be really confident to do that! Pedro Chirivella in the No.6, a fantastic football player. Marko Grujic together with him organising the whole pitch pretty much. Curtis Jones played his first game as a full-back in front of 100,000 people – I would have been nervous, he wasn’t. Rafa Camacho plays a pre-season that is just fantastic, mostly as a full-back which he’d never played before, so they’ve learned a lot. Ben Woodburn is 100 per cent back, for example. How it is with young boys, from time to time the improvement doesn’t go day by day, but he has played such a good pre-season. Nat Phillips, my god – what a pre-season he has played! These boys are completely open. What we will do with that and when, we will see.”

There were, of course, other less familiar faces spotted on tour. Summer signings Naby Keita, Fabinho and Xherdan Shaqiri each played some part in the three games the Reds contested during their stay as the trio geared up for their debut seasons at Anfield. Keita ran the Borussia Dortmund backline ragged during a 45-minute outing in Charlotte, North Carolina, though he was denied the chance to build on that excellent showing in the two fixtures that followed due to a neck strain.

Fabinho, meanwhile, featured in all three games, and saved his best performance for the tour-ending meeting with Manchester United - producing a masterclass in one-touch passing and shielding his defence. As for Shaqiri, his involvement in the World Cup meant he was late in joining up with his new teammates, but he wasted little time in announcing his arrival. The Swiss debuted as a second-half substitute against United and put the seal on a convincing win with a frankly ridiculous overhead kick in front of over 100,000 supporters. Not bad!

Liverpool's run to last season's Champions League final was effectively soundtracked by Jamie Webster's special renditions of 'Allez, Allez, Allez'. As the Reds marched on in Europe last term, the Scouser took his version of the Kop anthem from BOSS Mag nights in Liverpool to Shevchenko Park in Kiev. And so, with another exciting season on the horizon, it felt only right to let three US cities in on the fun as well.

Webster wowed fans at Supporters' Club events in both North Carolina and New Jersey before enjoying a night he will never forget in Michigan. As he treated another collection of supporters to the Reds' songbook, first-team manager Jürgen Klopp appeared for an impromptu singalong and - of course - a pint.

Before Liverpool headed out on tour, Alberto Moreno was doing his best to explain to the club's new signings what they were walking into. The Spaniard said: "You need to realise that in my first pre-season here, it really struck me. I knew I was joining a great club, one of the biggest in the world, but when I saw the amount of supporters we have... It’s amazing and it’s something that the players really enjoy and appreciate, wherever you go, you come across Liverpool supporters. I’ve already told Fabinho that when we go over to the States, he’s going to be amazed!"

But, as ever, fans in the US outdid themselves in putting on a show for the players and staff during their special visit. From open training sessions to supporter events, Reds turned out in their numbers to show that distance is no barrier to their love for the club. Crowds of over 55,000, 52,000 and 105,000 watched Klopp's men in Charlotte, East Rutherford and Ann Arbor respectively, underlining LFC's special standing in world football.

It wasn't just Liverpool's current crop who made the trip to the US, with four legendary figures from the club's past also tagging along. Ian Rush, Robbie Fowler, John Arne Riise and Sami Hyypia joined the Reds on their three-city jaunt and they were certainly kept busy throughout!

The quartet met with fans at Supporters' Club events, helped put on coaching sessions for local children, linked up with the Fire Department of New York's soccer team, and even tried their hand at tyre changing for the Roush Fenway NASCAR team. Who said footballers have it easy after hanging their boots up?