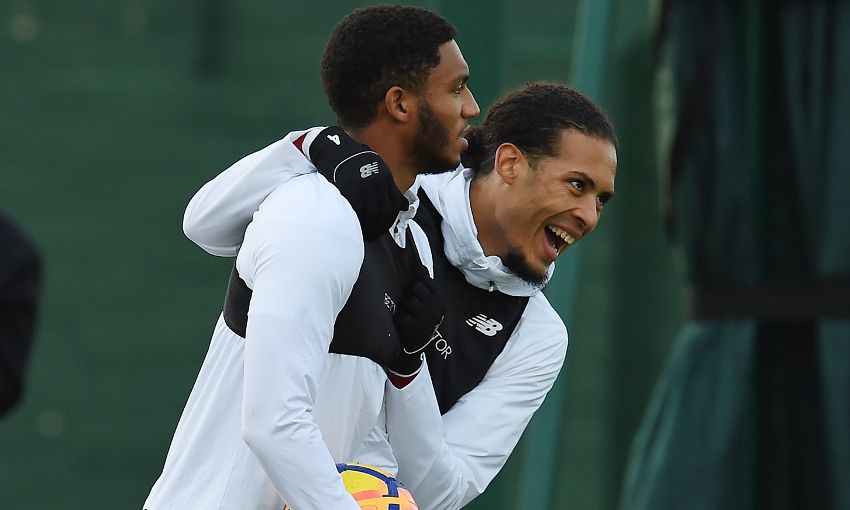 “He’s into his GIFs and memes, isn’t he? He loves a meme on Twitter!”

Since arriving from Southampton on January 1, the Netherlands captain has cemented himself as one of the biggest personalities within the Liverpool squad.

On the pitch, his presence at the core of the Reds’ defence has continued to grow, providing powerful and reliable backup for the more offensively minded members of the team.

It’s little wonder then Gomez – six years Van Dijk’s junior – holds his colleague in the highest of esteem, describing him as being ‘like a big brother’.

“He is as you’d expect – dominant,” the No.12 tells Liverpoolfc.com when asked about Van Dijk’s off-field presence during a chat at the team hotel in Charlotte.

“He is a good guy, he was skipper at Southampton and is for Holland, and his presence is felt within the camp.

“I personally get on well with him, both in terms of what we’re into and banter-wise. He is a good guy and it’s a pleasure to play alongside him. Hopefully I can keep learning from him and keep progressing.

“As I said, we get on well off the pitch – he’s like my big brother. It’s a pleasure to play with him and it’s about learning from him. He is experienced, and I’ve got time to grow into that position [centre-back].

“I enjoy playing there; hopefully we can build and keep progressing together.”

Pressed on specifically what aspects of Van Dijk’s game he can learn from, Gomez requires little time to think about his answer.

“I think his dominance – the way he can dominate, not just off the ball or in physical battles, but on the ball and the way he has his presence on the pitch felt,” he replies.

“It’s something that comes with experience and is something I want to bring into my game by keeping on learning. I’ll do my best to do so.”

The muscle injury that forced Joel Matip from the field prematurely in the first half meant an earlier-than-expected introduction into the action for the 21-year-old.

It’s a partnership that could be reacquainted in the opening Premier League game of the season as the Reds await further diagnosis on the severity of Matip’s issue, while Dejan Lovren is only set to return to Melwood days before the start of 2018-19.

“It’s about progressing during the summer and there are still a lot of games to go in pre-season, so that has to be the focus for me now,” Gomez states.

“You’ve got to visualise yourself in the best possible position and I’ll be doing all I can to be prepared if that’s the case. If not, then not – but of course I have to prepare mentally for that possibility and make sure I am ready on and off the pitch.”

As Gomez references, Liverpool still have four more pre-season friendlies to contest before they can begin honing preparations for the visit of West Ham United to Anfield.

They continue their summer schedule in New Jersey tonight, where Manchester City provide the opposition.

Gomez said: “It’s always good to come away; the tours are always well put together and there’s always amazing support. We tend to rotate between America and Asia and it’s amazing to come out here and play. They are great stadiums, amazing venues to play at, so it’s good.

“It wasn’t the best start for us [against Borussia Dortmund] in terms of the result, but we had positives in the performance to take. Now it’s about building from that.

“It’s crucial, especially at this point as we’re building into the season. It’s the level we want to be at and it’s important we test ourselves at that level. It was a good experience for us to get the time under our belts against good opposition. Now we’re looking to build on that in some big games coming up.”

Virgil van Dijk: We're disappointed, but the work will pay off