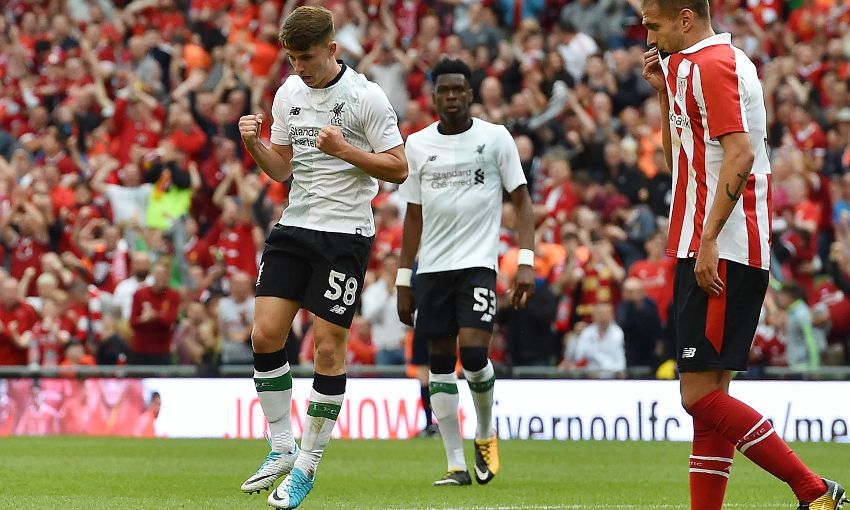 Liverpool signed off pre-season with a 3-1 victory over Athletic Club in Dublin.

Roberto Firmino’s assured penalty midway through the first half gave Jürgen Klopp’s men a lead they merited, only for Inaki Williams to equalise soon after.

But following wholesale changes during the interval at Aviva Stadium – where 51,333 fans were in attendance – Ben Woodburn slammed home their second and Dominic Solanke headed in a late third.

The result means the Reds have navigated their eight summer fixtures without a defeat in 90 minutes – and focus now turns to next weekend’s Premier League opener at Watford.

A 23-man squad made the journey to Dublin and Divock Origi led the attack, while James Milner lined up in midfield and Simon Mignolet began the encounter in goal.

Liverpool made most of the running in the opening quarter of an hour, first threatening when Mohamed Salah combined with Trent Alexander-Arnold before curling off target from the right hand side with a shot that was perhaps partly a cross.

There should have been no doubt on nine minutes, but when Origi timed his run in behind nicely to meet Firmino’s incisive knock forward the Belgian swept his finish wide of the post.

The No.27 next missed to the opposite side with a header from Salah’s floated delivery into the area, the Egyptian having been picked out in space by Alberto Moreno.

But the delay in the breakthrough ended on 20 minutes.

Firmino was clumsily fouled by Inigo Lekue as he waited for a deep cross and the Brazilian – who converted from the spot in midweek – stepped up to beat the goalkeeper’s dive with a low effort to his right.

LFCTV GO: The win in Dublin in 90 seconds

Liverpool’s play was crisp and creative as they enjoyed dominance of possession, yet Athletic levelled the score on the half-hour.

There was an element of fortune in the ball falling to Williams – Dejan Lovren’s attempt to scoop away a pass toward the forward ricocheting favourably – but the strike was clinically side-footed beyond Mignolet.

Moreno could have restored his team’s advantage ahead of the interval after breaking into freedom inside the opposition box.

The Spaniard met Firmino’s pass at pace, side-stepped his marker and tried to prod a shot underneath Kepa Arrizabalaga – who was equal to it at the second attempt.

Klopp made 10 changes to his team at half-time, with only Mignolet retaining his place when the players re-emerged for the remaining 45 minutes.

And but for the Liverpool ‘keeper, Athletic might have edged in front in the early stages.

Inigo Cordoba was slipped through in the left channel unmarked and had time to pick his spot, which was close enough to Mignolet to allow the save.

The stopper at the other end was soon called into action, pushing a fierce Sadio Mane blast from close range over the crossbar. The respite was short-lived, however.

Solanke scampered into freedom along the left flank and squared to Woodburn in a central position. The youngster’s first touch was sublime, opening up the chance to smack an unstoppable strike across Arrizabalaga and into the corner.

Liverpool continued to search for goals and produced a third with 79 minutes on the clock, Solanke sending a cool header into the net from Ragnar Klavan’s precise cross.

Another satisfying pre-season outing for Klopp and his charges, then, and now it is down to business with the Premier League kick-off just a week away.