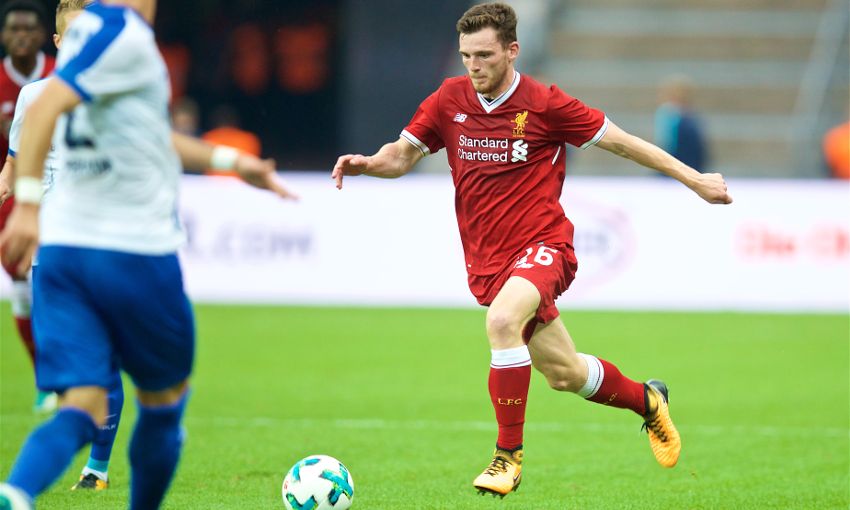 Andy Robertson summed up his first Liverpool runout in one word: 'Brilliant'.

Eight days on from his transfer to the club from Hull City, the left-back enjoyed a maiden experience of representing the Reds on the pitch – against Hertha BSC in Berlin.

Robertson was sent on at the outset of the second half and settled in without issue as Mohamed Salah added to earlier goals from Dominic Solanke and Georginio Wijnaldum to seal a 3-0 result.

“Brilliant,” he told Liverpoolfc.com of his bow.

“It was my first game since the start of May so it was good to get rid of the cobwebs. To pull on this shirt and play with the boys was an honour. Hopefully there’s many more to come.

“The boys did well in the first half and we had to wait patiently on the bench. But in the second half, I thought we controlled the game as well. The lads all dug deep and we got what we needed out of the game.”

More than 54,000 supporters were in attendance for the clash between Liverpool and the Bundesliga side on a night when each celebrated their 125th anniversary.

There were plenty of Reds fans among the crowd and a keenly-fought pre-season contest was complemented by a spirited mood in the stands.

“The Hertha fans were brilliant and the Liverpool fans in the corner were different class throughout the game,” said Robertson.

“It was a good atmosphere to play in, a great stadium and they’re the games you want to play in.”

The fixture came after three days of a demanding training regime for the players at their base in Bavaria, having arrived in Germany on Wednesday evening.

A triple session was the order of the day yesterday, for example, and the nature of the schedule has been satisfying for Robertson so far.

“The boys have been together longer than a few of us who came back late. We’re gelling in,” added the Scot.

“Training has been intense, it has been good. It’s good to get a game, everyone enjoys playing games. It was good to come away with a win and a clean sheet.”