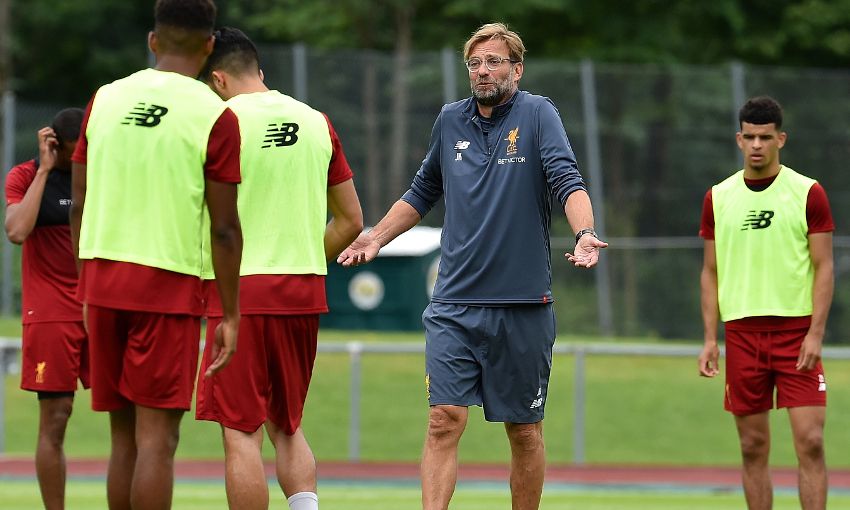 Liverpool will make the most of the 'perfect' conditions in Germany to step up their pre-season preparations accordingly over the next week.

That is the plan according to Jürgen Klopp, who took a 30-man squad to his homeland on Wednesday to begin a training camp that will also include three friendlies.

And their work with the ball won’t be restricted to the game against Hertha BSC in Berlin on Saturday or Audi Cup meetings with Bayern Munich and either Atletico Madrid or Napoli.

Far from it, in fact. With hard yards in their legs from the three weeks of intensive pre-season efforts so far, the order of the day during the stay in Germany will be ‘a lot of football’ explained the boss.

“It’s a mix-up of intensity. We cannot avoid this; we have to train really hard and a lot. Plus, giving information to the players,” Klopp told Liverpoolfc.com.

“We have to mix it up and do it under pressure, not isolated. We let them do what they are strong at, then with a little talk here and a little talk there.

“We have different angles from the coaching side to watch and have individual talks. It’s intense, but there’ll be a lot of football and a little bit of isolated running.

“We will be there, we will play a game in full training which I think makes sense. After the week here we will have Dublin, then another week and then we will be ready.”

Liverpool are training in the serene environment of Rottach-Egern.

The weather which greeted Klopp and his players when they arrived was reminiscent of Merseyside, with rain falling through to their opening session that evening.

Conditions are somewhat easier than the humidity they experienced in Hong Kong last week, however, and the boss is determined to eke everything out of this stage of pre-season.

“We can be really focused and there’s nothing that could disturb us, apart from the weather but it’s now perfect for training. We should be very focused.

“We always do what we have to do, but our main job is to train and make the boys as good as possible. Since we started pre-season, I was really looking forward to these eight days here. Now we are here so we should use it.”