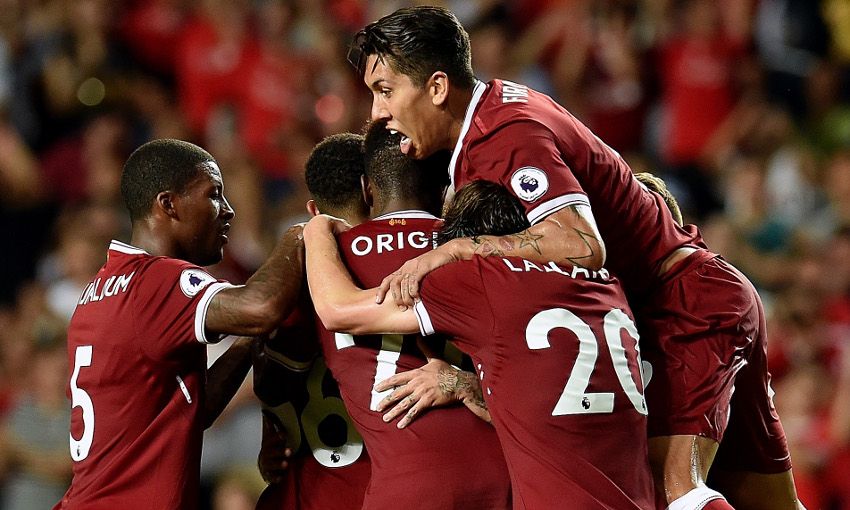 Liverpool rounded off their tour of Hong Kong by winning the Premier League Asia Trophy with a 2-1 victory over Leicester City on Saturday.

Islam Slimani headed the Foxes into an early lead from close range; however, Philippe Coutinho and Mohamed Salah combined magnificently to enable the former to nod in an equaliser soon after.

Coutinho then got himself on the scoresheet with a stunning finish prior to the break, cutting in from the left and drilling into the far corner to ensure it was the Reds clinched the pre-season friendly tournament trophy.

In front of a near-40,000 crowd, a sizeable majority of which there in support of Jürgen Klopp’s side, Liverpool began strongly.

The zip of the Reds’ attacking play was raising decibel levels and causing Leicester problems, and Coutinho had Kasper Schmeichel worried with a trademark curler after just three minutes on the clock.

However, firmly against the run of play, the Foxes grabbed an early lead; after opening up their opponents down the left, Christian Fuchs delivered to the back post, where Slimani powered a header into the net from point-blank range.

Nevertheless, Liverpool didn’t waste any time restoring parity – and they did so via a goal of outstanding quality.

Initially collecting the ball wide right, Salah swapped passes with Trent Alexander-Arnold before moving inside. He then laid it square to Coutinho and continued to dart into the box.

The Brazilian took a touch before scooping a pass into the path of his teammate’s run, and Salah did the rest by heading beyond Schmeichel.

Then, 10 minutes before half-time, the Reds went close to taking the lead. Kasper Schmeichel’s punch under pressure at a Coutinho free-kick dropped invitingly for Georginio Wijnaldum, but his hook back towards goal bounced just wide of the upright.

Klopp was forced into a change just before the interval, with Alberto Moreno taking the place of James Milner due to a knock, but Coutinho gave cause for cheer when he struck a second with a trademark piece of quality.

Picking up possession on the left, the No.10 ducked and weaved his way beyond Leicester challenges before arrowing an unerring effort across goal and into the far corner.

However, that advantage could have been wiped out twice inside the opening three minutes of restart.

First, Jamie Vardy moved into space inside the box and steered his shot across goal but wide of the post, before he was thwarted in a one-on-one situation by Loris Karius on the edge of the area soon after.

At the other end, substitute Marko Grujic hooked a half-volley over the crossbar with an acrobatic effort, while Liverpool required another new introduction to the contest – Ragnar Klavan – to pull off a saving challenge to prevent Vardy from steering home a leveller after he’d again wriggled into a dangerous position.

There were to be no further opportunities of note for either team as the game edged towards its conclusion in sweltering conditions, meaning the Reds were the team lifting the Premier League Asia Trophy before heading back to Merseyside.

Behind the scenes: The story of lifting the PL Asia Trophy