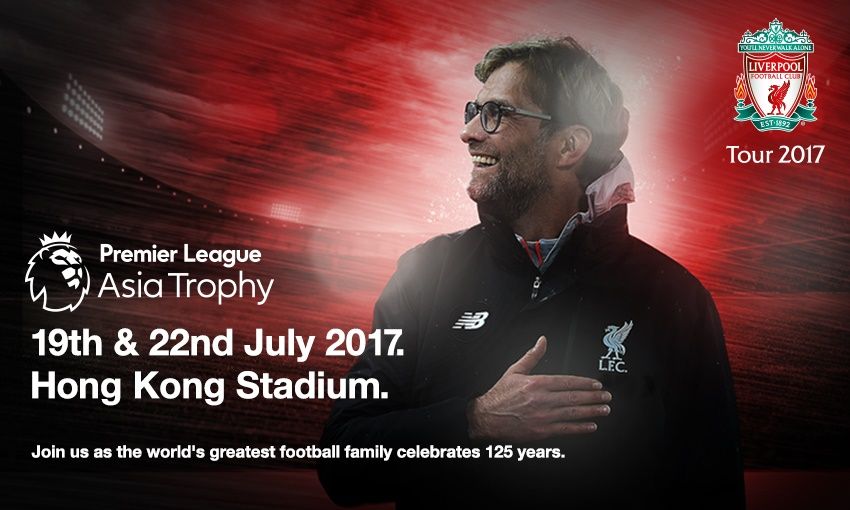 Reds to head to Berlin for anniversary game this summer

Liverpool FC has today confirmed that the first team will head to Hong Kong for the Premier League Asia Trophy this summer.

The eighth edition of the tournament will take place at the Hong Kong Stadium on Wednesday July 19 and Saturday July 22.

The Reds will make their second appearance in the competition alongside fellow Premier League clubs Crystal Palace, Leicester City and West Bromwich Albion. Liverpool first played in the tournament back in 2007.

Jürgen Klopp said: “We’re really looking forward to playing in the Premier League Asia Trophy this summer. It’s important that the club takes part in competitions like this as it gives local fans the opportunity to get closer to the action.

“The club has a huge fanbase in Hong Kong and we hope to put on a good performance for our fans.”

The Premier League Asia Trophy is part of the league’s ongoing commitment to fans in Asia, and to supporting the development of football at all levels in Hong Kong and across the region.

A full programme of coaching and community initiatives, including another Premier Skills coaching programme run in partnership with the Hong Kong Football Association, will run alongside the tournament.

Ticketing information for fans will be announced in early June. Tickets will be sold per matchday (July 19, July 22) with each ticket allowing access to both matches on that day.

Premier League executive chairman Richard Scudamore said: “We are very excited to be returning to Hong Kong this summer for the Premier League Asia Trophy. We know from previous visits that fans in Hong Kong, and across the region, are passionate supporters of our clubs.

“In Crystal Palace, Leicester City, Liverpool and West Bromwich Albion we have a group of excellent clubs, players and managers who will give local fans a fantastic Premier League experience.”

“As co-organisers of the event, the Hong Kong Football Association will do everything it can to ensure that it is the best Asia Trophy ever. With two matchdays and a wide range of community engagement activities, there is a lot to look forward to and personally, I can’t wait.”

'It's not that cold!' - Watch the Reds end training with dip in lake