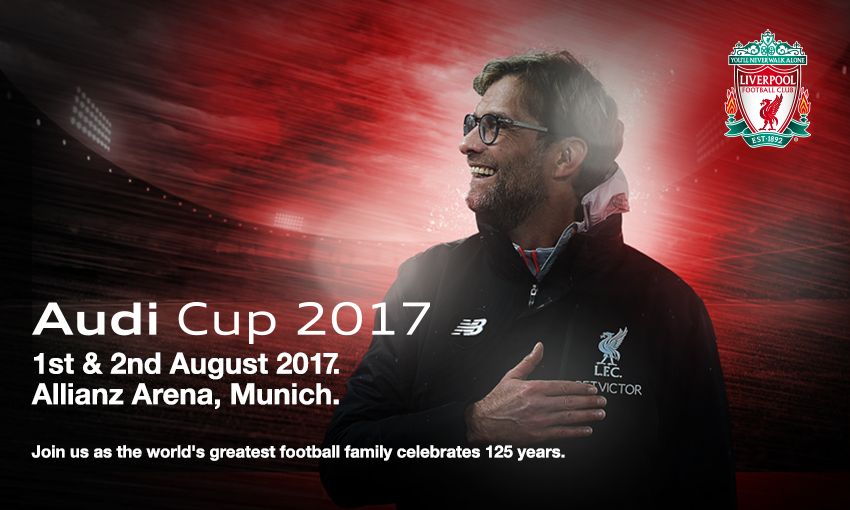 Liverpool FC today confirmed it will make its debut in the Audi Cup this summer in Munich.

The fifth edition of the tournament will take place on August 1 and 2 at the Allianz Arena, where the Reds will compete against three other European clubs – Bayern Munich, Atletico Madrid and a further team to be announced at a later date.

The news was broken via live 3D holographic transmission with Jürgen Klopp beaming in from Anfield to join Bayern’s Carlo Ancelotti and Atletico’s Diego Simeone at the hologram press conference in Munich in a sporting-world first.

This is the first time the Reds have competed in the biannual event and will see Klopp’s return to the Allianz Arena, where he enjoyed some memorable moments with former club Borussia Dortmund.

The Audi Cup premiered in the summer of 2009 to mark the 100th anniversary of the Audi brand. The format has remained the same ever since.

On Tuesday August 1, two semi-finals will be held. The losing teams will then play for third place on Wednesday August 2, before the winners are pitted against each other in the final.

The kick-off times will be 5.45pm and 8.30pm (CEST)/4.45pm and 7.30pm (BST), respectively, with spectators watching all four clubs on both days. Tickets can now be purchased at www.audicup.com. Day tickets are available from 20 euros.