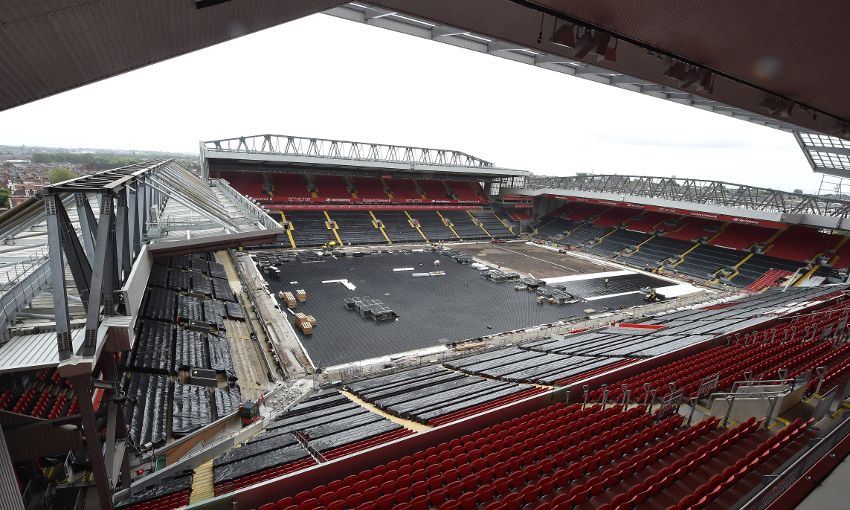 With 2017-18 fast approaching for Liverpool FC, the pitch at Anfield is undergoing improvements as the Reds prepare for their first home game of the season against Crystal Palace on August 19.

Ground staff at Anfield are working on the summer project to improve the playing surface and overall quality of the pitch ready for the new campaign.

The changes will see a new automatic irrigation system installed to help improve drainage from the pitch. It will allow the surface to be watered prior to kick-off in under three minutes. Anfield will also be the first stadium in the UK to fit the unique 'Permavoid' irrigation system which will speed up drainage, especially in wetter months.

In addition, a new undersoil heating system has been put in place which will help aid growth and also prevent the ground from freezing during the winter months. As part of the undersoil heating system, over 19 miles of pipeline has been put in place to ensure optimum conditions for maintenance and grass growth. Eight heat and moisture sensors have been installed to help monitor the best growing environment for the pitch.

On the pitch renovations, Andrew Parkinson, LFC’s operations director, said: “We have a number of significant projects ongoing across the stadium during the summer months. The pitch renovation is a major piece of work which the whole team are really excited about ahead of the new season.

“This is another significant investment at Anfield making further important improvements like installing state-of-the-art drainage and irrigation systems that will ensure our players have the best playing surface for the seasons ahead.”