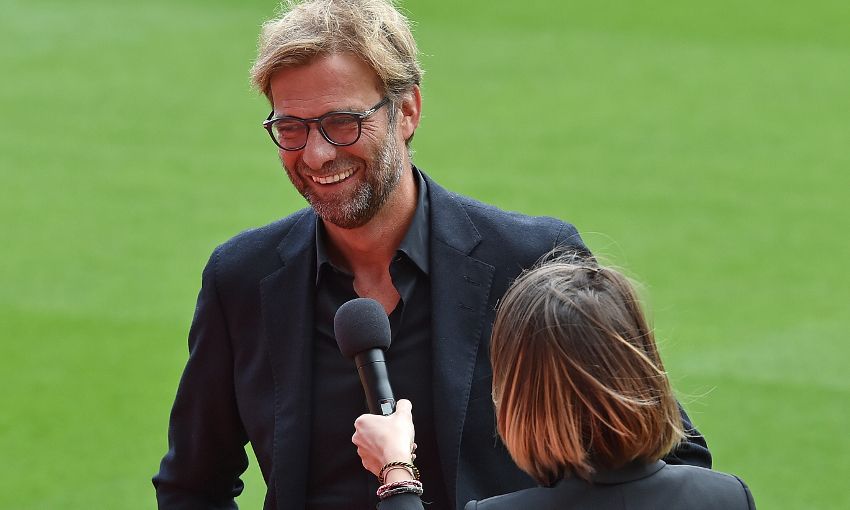 Jürgen Klopp spoke at the official unveiling of Anfield's new Main Stand today - and the boss had a message for all Liverpool fans attending tomorrow's game against Leicester City.

Klopp was interviewed pitchside in front of the redeveloped stand, with the Reds' first home game of the new season now just a little over 24 hours away.

Read on for a full transcript of what the manager had to say...

Jürgen, we know you fell in love with Anfield when you first arrived here. What are your first impressions of this magnificent new Main Stand?

Three days ago I was here for the first time. I was really impressed and thought ‘OK, we have to bring the team here before we play’, because otherwise you come in and it’s so impressive that you cannot stop thinking about it. It should be an advantage for us so we had training here yesterday. It’s one of the nicest stands I’ve ever seen in my life, I don’t know if there’s a nicer one or a better one around.

I played in front of the ‘Yellow Wall’ at Dortmund, with 27,000 people standing or 21,000 sitting. It [the Main Stand] is great, it’s amazing, it’s the best thing we could do with the stadium. I see all the legends sat here and this football club is built on its fantastic history. This stand is much better than it was before - we have to use it, we have to fill the stadium with life, starting tomorrow.

Yesterday’s session here was a little bit angry and loud - the acoustics are better than before and that’s another benefit. Everybody who will come here tomorrow, be as loud as you can! Be as loud as you can and it will help. Hopefully we’ll have a lot of wonderful days and nights here.

Can you imagine what it’s going to be like here tomorrow?

No, not really. I’m not really interested in the atmosphere before the game, to be honest, but when the game starts I would like to ask for a little bit of support! If they do that and I convince the players to give their best performance, we can be a real force. It’s about our performance on the pitch, we don’t expect the fans to come here and celebrate themselves, we want to inspire our supporters with our play. It’s against the current champions so we need to be good. Let’s try it, let’s take the first step in our future together.

How important can the fans’ relationship with the players be in this wonderful stadium?

We can do everything that all other clubs are doing, but you can always be special if you want to be special. It’s always possible. Being the best team is the first step, so we can try to do that together. We had our first three games all away, it’s been so long since we played here, coming back tomorrow and starting the season after the international break, it’s a good chance that we have. We have to use the quality of the players, the power of the club and the power of our supporters and then it can work. If we do this every week, it will work.