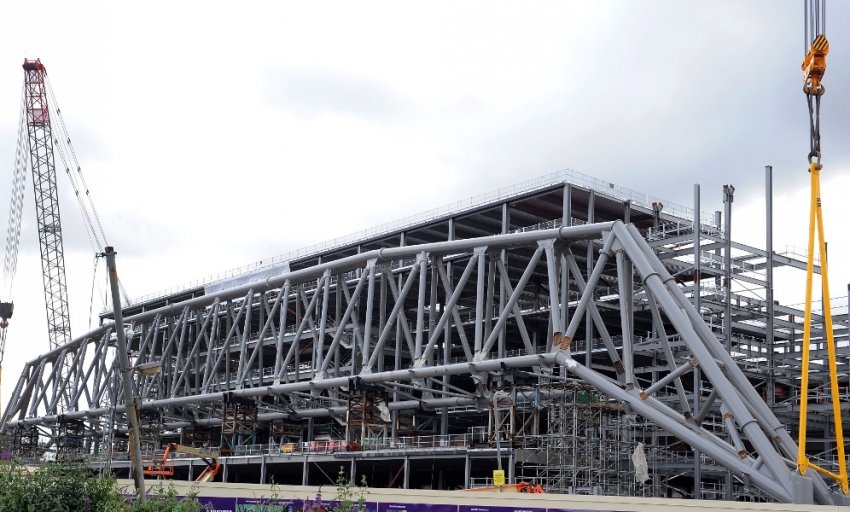 The operation, which began at 6am, will see Anfield’s redevelopment reach a major milestone when the new truss is raised onto two 28m-high towers at either side of the Main Stand.

The lift, performed by two of the UK’s largest cranes, the AK680 and AK912, will complete one of the most complex parts of the Main Stand build programme.

Over the next few hours, the 252ft-high cranes, operated by a specialist team at the Anfield site, will work in tandem to raise the 140metre-long truss, which has taken several weeks to assemble, before installing it high above Anfield.

The lift operation is scheduled to take a full day to complete and follows months of detailed planning by Carillion, the club’s construction partner.

Ian Ayre, chief executive officer of Liverpool FC, said: “This is an historic milestone in Anfield’s history as the stadium transformation continues to take shape. We embarked on this significant expansion project just seven months ago and today we’re lifting the Main Stand’s new truss and marking another incredible chapter in the club’s history.

Installing the 20m-high truss, which will be visible from several points in the city, will enable work to get under way on constructing the Main Stand’s new roof, as the site’s cranes begin the task of lifting and securing steel roof rafters into place.

Significant progress has been made on Anfield’s redevelopment since the end of the football season. The existing two-storey building at the back of the Main Stand has been demolished to allow the two structures to be connected and a two-storey podium level constructed to provide supporter access into the new stand.

Liverpool FC announced the redevelopment of Anfield in December 2014 and plans to add around 8,500 seats, taking the Main Stand capacity to over 20,000 and increasing the overall capacity of Anfield to around 54,000.

The Main Stand expansion project remains on target for completion during the 2016/17 season, with the redeveloped stand set to comprise three tiers and the existing lower tier re-profiled to accommodate a widened player tunnel, new team benches, media platform and wheelchair viewing positions.

For further information on the expansion of the Main Stand please visit www.liverpoolfc.com/stadium-expansion