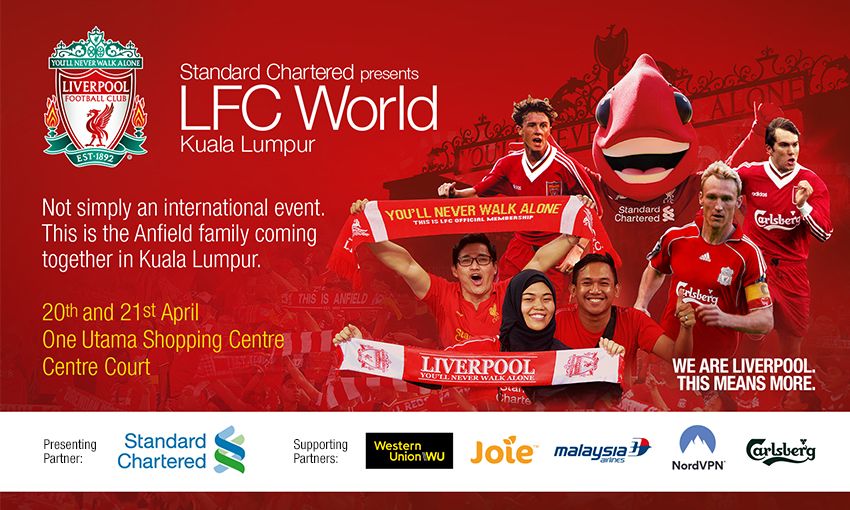 Kuala Lumpur has been confirmed as the next stop for LFC World presented by Standard Chartered.

The free two-day fan experience will see the creation of an LFC World hub at One Utama Centre Court in Kuala Lumpur on April 20 and 21.

Reds fans in Malaysia will be able to enjoy a whole host of activities for all ages and meet Sami Hyypia, Jason McAteer and Steve McManaman.

Now in its third season, LFC World presented by Standard Chartered has already visited nine locations across the globe, bringing a truly authentic experience to thousands of supporters.

“For Reds in Malaysia, LFC World Kuala Lumpur is the place to be,” said Hyypia.

“We know not all our fans can make it to Anfield, so this is our way of bringing Anfield closer to them. We can’t wait to meet everyone, it’s going to be a fantastic weekend.”

Within the hub, fans in Kuala Lumpur will be able to have their very own taste of Anfield with recreations of iconic locations such as the Shankly Gates, This Is Anfield sign, and LFC World’s very own version of the Anfield dressing room, where supporters can sit under the shirts of their favourite LFC players – including Roberto Firmino, Sadio Mane, Mohamed Salah and Virgil van Dijk.

There will be lots of fun activities for fans to take part in throughout the event, plus special prizes and giveaways provided by presenting partner Standard Chartered, and other event partners, including Western Union, Joie Baby, Malaysia Airlines, Carlsberg and Nord VPN.

Supporters can also share the Anfield atmosphere at a free-to-attend viewing party on Sunday April 21 at the LFC World hub, where there will be live on-stage activity with the Reds legends prior to the match against Cardiff City, which will kick off at 11pm.

More information will be announced closer to the event via the official LFC World website and Facebook page.

Fans will also be able to get involved in various competitions and giveaways in the run-up to the event, including a chance to meet the legends, and the ultimate prize of a trip to Anfield courtesy of Standard Chartered. Plus, more information will be available on how to claim a free ticket to attend the viewing party.