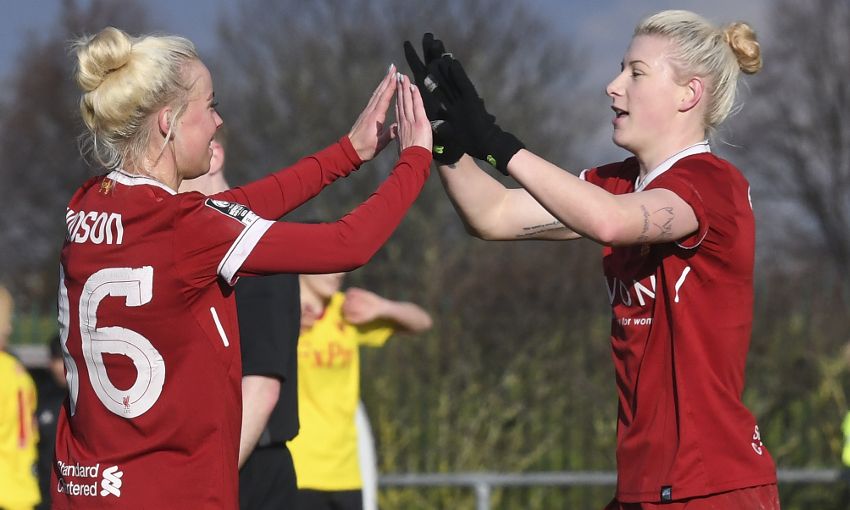 Liverpool Ladies eased to a 4-0 win over Yeovil Town Ladies on Sunday afternoon.

Laura Coombs, Gemma Bonner, Ashley Hodson and Bethany England were the goalscorers as Scott Rogers’ side bounced back impressively from last weekend’s defeat against Birmingham City.

Already boosted by the return from injury of captain Bonner, the Reds went ahead within a minute of kick-off as Coombs pounced on a clearance to find the net with a volleyed finish.

The 27-year-old turned provider for the Ladies’ second shortly after the quarter-hour mark – and there was a delighted scorer from the scramble caused by her corner.

It was the skipper, Bonner, who forced the ball home to mark her comeback in style and provide Rogers’ team with a welcome advantage.

And two minutes later that lead was increased to three when Hodson, who had been denied by Yeovil goalkeeper Megan Walsh seconds earlier, drove in a left-footer.

Free video: The best of the Yeovil action

Sophie Ingle sent an effort against the post before half-time, too, as the visitors controlled the Women’s Super League encounter for the most part.

They added just one goal to the scoresheet in the second half – England tapped home from close range after Alex Greenwood’s free-kick clattered the woodwork.