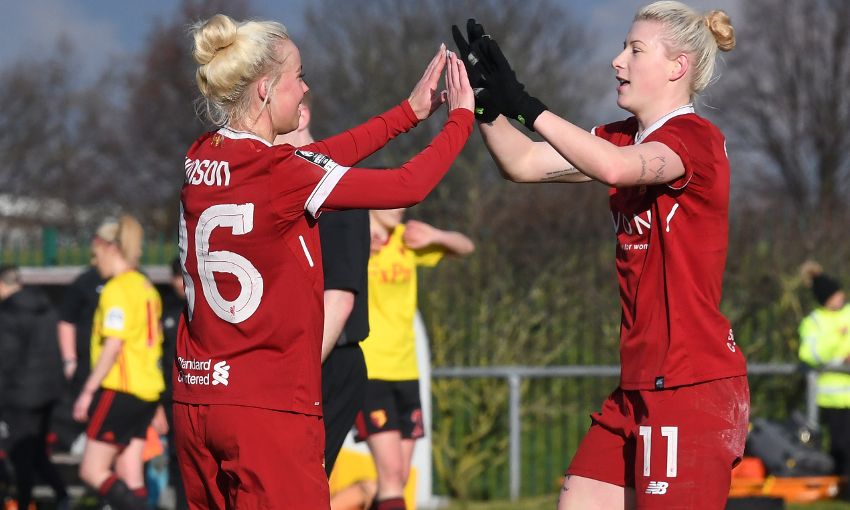 Liverpool Ladies produced an outstanding performance as they beat Watford 5-0 in the Women's FA Cup fourth-round on Sunday afternoon.

Bethany England continued her fine scoring form with two goals, while Ali Johnson, Caroline Weir and Martha Harris were also on the mark.

As the Select Security Stadium in Widnes was not available for this fixture, Scott Rogers' charges played at the Liverpool County FA Ground in Walton Hall Park.

With captain Gemma Bonner injured, Amy Turner made her first start for the Reds alongside debutant Lucy Roberts.

Liverpool Ladies started well and opened the scoring on seven minutes when a superb pass from Weir found Johnson who finished expertly.

Three more goals then duly arrived in the space of 10 minutes.

Weir made it 2-0 with a fine finish, England added a third following a superb cross from Ashley Hodson and Harris let fly with a brilliant strike that made it 4-0.

Rogers was then forced into a defensive switch. Turner, recently back from a long-term injury was forced to leave the field with Amy Rodgers taking her place.

The Reds continued to play some superb attacking football in the second 45 minutes but just had the one extra goal to show for their efforts.

After seeing a header tipped onto the bar, England grabbed her second of the game to make it 5-0.

The draw for the fifth round of the Women's FA Cup takes place on Monday morning.