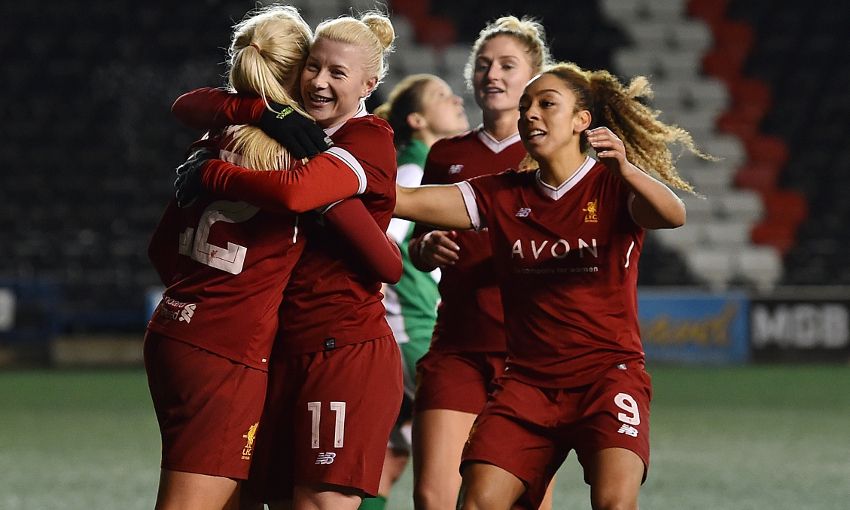 Bethany England scored four goals as Liverpool Ladies enjoyed a great start to 2018 with a thumping 8-0 win over Yeovil Town Ladies at the Select Security Stadium in Widnes on Saturday evening.

After the break over Christmas, this was the first Women’s Super League encounter for the Reds since a 1-0 victory against Birmingham City Ladies back on November 11.

Scott Rogers’ charges responded in style to their Continental Tyres Cup quarter-final loss at Chelsea as they played some sparkling football.

Liverpool made a bright start and almost took the lead in the opening minute of the game. A lovely through pass from Laura Coombs put Caroline Weir clear on goal, but her effort was superbly saved by Megan Walsh.

The hosts continued to play the game in their opponents’ half with Coombs dictating the action in the middle of the park.

On 10 minutes Coombs released Martha Harris down the right and from her cross Jess Clarke’s effort was somehow kept out by the agility of Walsh.

The pressure finally told with the opening goal on 16 minutes. Weir found space down the left flank and her cross was turned into her own net by the unfortunate Yeovil defender Ann-Marie Heatherson.

Three minutes later it was so close to being 2-0. A superb pass from Weir released Clarke down the right, and her cross found England at the back post who was so unfortunate to see her attempt come back off the post and stay out.

On 24 minutes it was captain Gemma Bonner’s turn to bring out the best in the excellent Walsh. A deflected pass found the No.5 in the clear, but her strike was brilliantly kept out.

It was 2-0 on the half-hour mark. A precise pass from Sophie Ingle freed Clarke in space down the right. The No.9 cut inside and saw her shot saved by Walsh but England was on hand to slot home the rebound.

Six minutes before the break it was 3-0. A superb through ball from Ingle put England clean through, and the No.11 kept her composure and found the net.

A minute after the restart Clarke almost added a fourth goal but was unlucky to see her effort come back off the post and scrambled away to safety by Yeovil stopper Walsh.

It was 4-0 on 51 minutes and this time there was no mistake as Weir found the net with a stunning low left-footed drive from 22 yards out.

Two minutes later England got her hat-trick when she raced onto a through ball, beat the goalkeeper Walsh and slotted into the net.

It was 6-0 as the hour approached. Weir’s effort was charged down and Clarke was on hand to find the net from close range. It was a strike the No.9 deserved for her outstanding team play.

Every time Liverpool Ladies went forward a goal seemed inevitable and a minute later it was a magnificent 7-0. England netted her fourth goal of the game from close range after an excellent run and cross down the left from Alex Greenwood.

It was to be England’s final contribution before she left the field to a standing ovation from the home crowd with Kate Longhurst taking her place.

Despite conceding seven goals just past the hour mark, Walsh continued to make some outstanding saves. One in particular from Weir from close range was brilliant. The No.10 produced a sweet turn in the box and saw her effort which was destined for the top corner somehow kept out by the reflexes of the goalkeeper.

The home crowd were up on their feet again on 66 minutes when Amy Turner made her debut for Liverpool Ladies when she replaced Casey Stoney.

After over a year out through injury, Turner has worked so hard to get back to action and her return is a major boost for Rogers and his squad.

It became 8-0 on 75 minutes. A superb run from Clarke set up Coombs who made no mistake with a brilliant finish.

Yeovil Town Ladies were certainly grateful for the final whistle as Liverpool Ladies had to settle for the eight goals with Ashley Hodson and Longhurst both missing from close range towards the end.