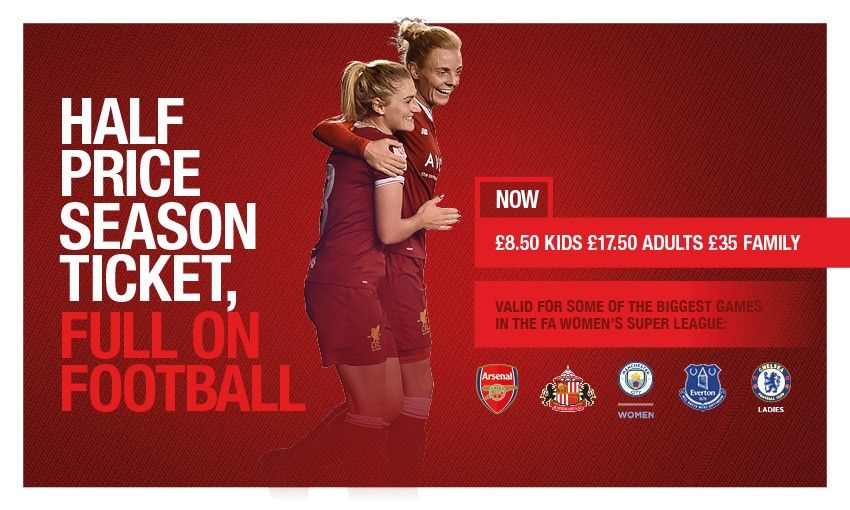 Watch some of Liverpool Ladies' biggest games for less with a half-season ticket valid from February 1, 2018 onwards.

Season tickets for the second half of the Liverpool Ladies' campaign are on sale now starting from just £8.50 for children under 16 years.

Supporters have plenty to look forward to in the FA Women's Super League next year, with the Reds set to face likes of Arsenal, Sunderland, Manchester City, Chelsea and Merseyside rivals Everton.

With home games in the Continental Tyres Cup and Women’s FA Cup also included, the half-season ticket offers an affordable day out for the whole family.

Turnstiles usually open one hour before kick-off, with plenty of activities to enjoy, including free face painting and colouring activities for the kids and a chance to meet official club mascot Mighty Red.

Where possible, the club will facilitate a meet and greet with a player before the game, while several players will stay behind for a short time after the final whistle for photos and autographs with their supporters.

What's more, both full and half-season ticket holders will benefit from exclusive prize draws and events – more details will be announced on the LLFC website throughout the season.

The half-season ticket makes a wonderful Christmas gift for any Red – click here to buy today. Keep up to date with the latest Liverpool Ladies news click here.