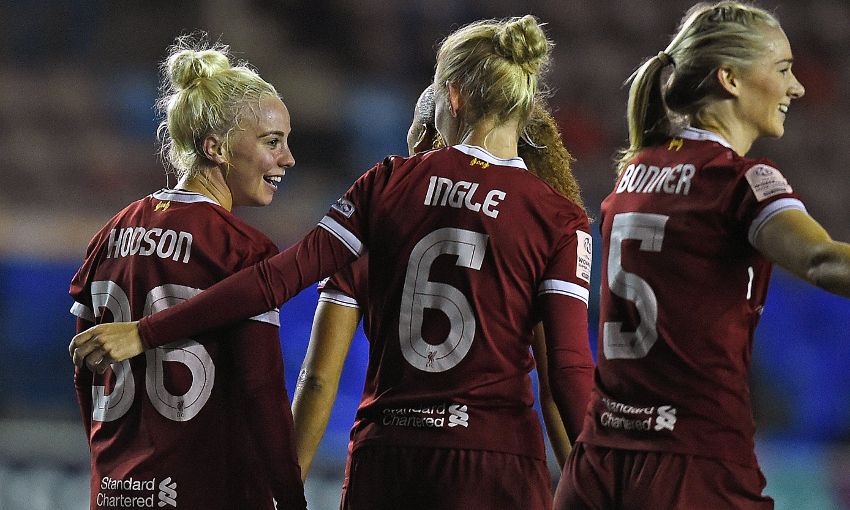 Liverpool Ladies cruised to a 5-1 victory against Aston Villa Ladies in the Continental Tyres Cup at the Select Security Stadium on Wednesday night.

The game produced five different goal scorers, whilst Niamh Charles was a constant threat on the left-hand side as Liverpool ran riot.

The result means Scott Rogers’ charges have secured their place in the quarter-finals of the Continental Tyres Cup.

Rogers made a number of changes from the victory at the weekend, with five players coming into the starting line-up. This included Becky Flaherty making her competitive debut in goal, and Scottish international Caroline Weir returning to action.

The game started at lightning speed with Charles, Jess Clarke and Weir all getting early opportunities on goal.

Sian Rogers continued to be tested in Villa’s goal before Ashley Hodson broke the deadlock in the 17th minute. A fantastic cross from Charles was met by an equally good header which placed into the far corner by Hodson.

Charles constantly caused problems for the Villa defence, teeing up Clarke in the centre of the area, but the forwards attempt was smothered by Rogers.

Moments from half-time the goalscorer turned provider as Hodson’s lofted cross from the right flank was met by Clarke, who leapt higher than the defence to guide her header home.

Liverpool didn’t have to wait long to make it three. Clarke won the home side a penalty and Greenwood stepped up to slot the ball home within five minutes of the restart.

Shortly after the hour mark, Kate Longhurst had a chance to increase the Reds advantage when the ball fell her way, but the midfielder blazed the ball over the bar.

Rogers’ side looked to instantly regain their three-goal advantage with a wonderful link-up between Greenwood and Hodson which almost lead to Weir setting up Johnson – however, the final ball fell just behind the forward.

As the game went into the final 10 minutes Weir was brought down after a marauding run in the Villa half. The Scottish starlet stepped up and whipped in a delightful free kick to make it 4-1.

Substitute Ali Johnson still had time to bag a fifth for the Reds to make it an emphatic 5-1 victory.