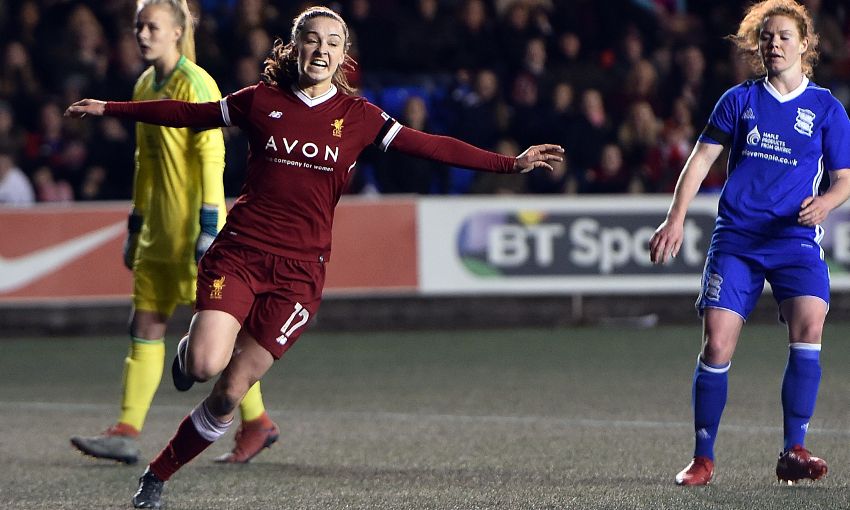 Niamh Charles scored the only goal of the game, whilst captain Gemma Bonner produced a stand-out display as the home side secured a vital three points.

For right-back Harris, it was her first WSL start in over a year after returning from a knee injury.

Before the game there was a minute’s silence held by Liverpool Ladies and Birmingham City Ladies to mark Armistice Day.

The contest started at a quick tempo with neither side being able to assert control on the game. The Blues had the best early chance, as Freda Ayisi headed a Lucy Quinn cross over the bar from close range.

On the half-hour mark, Liverpool took the lead in style. Bonner fed Charles through with a fantastic lofted pass, and the forward coolly placed the ball over Hannah Hampton to put the Reds 1-0 up.

Reds stopper Siobhan Chamberlain was called into action instantly after the restart, when Rachel Williams latched onto a smartly placed pass, but the England international did well to save from close range.

Five minutes from half-time, Wellings found herself in a fantastic position to equalise for the away side, but to the relief of Rogers’ team, her lobbed attempt went just wide of the goal.

Moments from the half-way mark Harris started a slick passing move involving both Coombs and Charles, before receiving the ball back; however, her attempt from an acute angle was blasted wide. Minutes later came the whistle and Liverpool Ladies went into half-time one goal to the good.

Just after the break Bethany England had a great chance to double the lead. Charles’ superb diagonal pass found England in the area but the forward blasted the ball over the Birmingham goal.

Despite the early oppertunity the second-half fell into a similar patter to the first, with little separating the two sides in a tight encounter.

Birmingham Ladies had two free-kicks on the edge of the Reds area within moments of each other, with both going just over the bar.

The Reds went on a fantastic counter-attack in the final 10 minutes of the game as Charles sprinted over half of the pitch, but her final delivery to Harding had just too much power and was collected by Hampton.

Natasha Harding went close in stoppage time as her shot from a tight angle was fired inches wide of the far post. That was the last of the action in the close contest as Rogers' side held on for a hard fought victory.