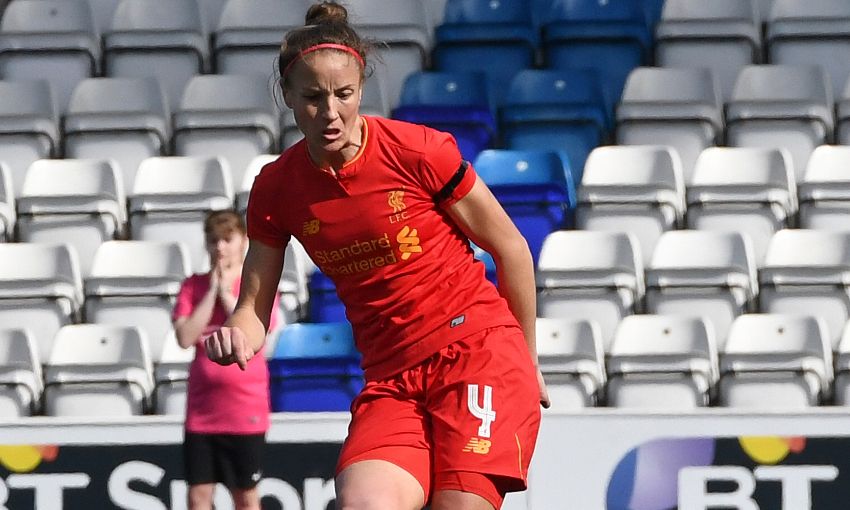 Casey Stoney made an assured debut as Liverpool Ladies reached the semi-finals of the Women's FA Cup after a deserved 2-0 win over Notts County Ladies on Sunday afternoon.

The England star was a solid presence at the back alongside captain Gemma Bonner in a partnership that offers manager Scott Rogers plenty of encouragement for the season ahead.

Goals from Caroline Weir and Natasha Harding saw off the strong challenge of Rick Passmoor's County at the Select Security Stadium in Widnes and kept alive hopes of silverware for Liverpool in 2017.

Before the action got underway a minute’s applause was held in honour of the great Ronnie Moran, who sadly passed away on Wednesday. The Liverpool players also wore black armbands as a mark of respect.

Rogers’ charges started brightly and opened the scoring after just two minutes through Weir, although there was a huge slice of fortune about it.

Kate Longhurst made a surging run into the County half and, despite being fouled an advantage was played, and Weir’s 25-yard low shot somehow slipped through the hands of Carly Telford and into the net.

On six minutes Weir was almost through on goal again. A brilliant run down the left flank from Alex Greenwood saw her cross find Weir, but a last-ditch challenge from Louise Quinn denied the Scotland international.

Notts County were proving a threat from set-pieces and on 11 minutes they almost carved out an equaliser, but Kirsty Linnett could only send a free header wide from close range after a superb delivery from Danielle Buet.

Four minutes later, Reds stopper Siobhan Chamberlain showed her class when she got a strong arm to divert away a dangerous effort from an acute angle by Rachel Williams.

Despite having to withstand some pressure, Liverpool Ladies soon made it 2-0 on 18 minutes through a fantastic finish from Harding.

Receiving the ball in space, the Wales international fired an unstoppable effort beyond the reach of Telford into the top corner.

The Reds then survived a scramble in their own penalty area when only a couple of heroic blocks from captain Bonner kept the visitors at bay.

At the other end it was so nearly 3-0 on 35 minutes. The incredible pace of Shanice van de Sanden down the right created a glorious opening for Longhurst, but the No.7 couldn’t keep her effort down as the ball sailed over the bar.

Five minutes after the restart Van de Sanden came so close to converting a superb Weir cross but, just as she was set to tap home, a last-ditch challenge from Quinn just managed to divert the ball off target.

A minute later Harding found herself clean through on goal but was denied by an excellent block from Telford.

Van de Sanden also curled an effort just past the post as Liverpool Ladies produced an excellent display in front of their magnificent vocal supporters.