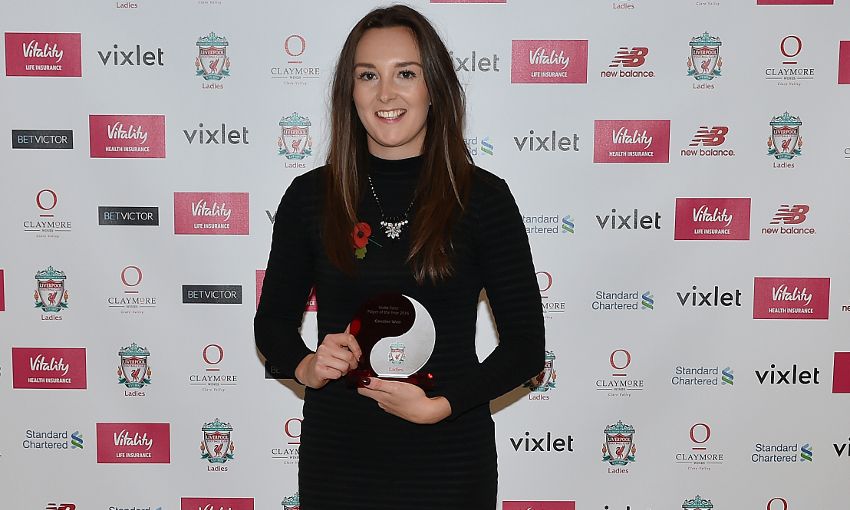 Fans voted for Caroline Weir as Player of the Season at the annual Liverpool Ladies FC Player Awards on Monday night.

The accolade, sponsored by Vixlet, was presented by former Olympic and world champion gymnast, Beth Tweddle.

In the ceremony held in Anfield's Main Stand, in association with official partner Vitality, Reds No.10 Weir also collected the Standard Chartered Goal of the Season prize for her stunning second strike against Doncaster Rovers Belles in October.

Wales captain, Sophie Ingle, was named Players’ Player of the Season by her fellow teammates, whilst club captain Gemma Bonner picked up the Vitality Special Recognition award after making her 50th FAWSL appearance as skipper earlier this year.

On collecting the prize, Bonner said: “It is a real privilege to have won the Vitality Special Recognition Award. It is fantastic to have been recognised by the club for my commitment to the team since joining in 2012.

“I have loved every minute of playing for this great club and hopefully I can make many more appearances for Liverpool Ladies.”

Manager Scott Rogers added: "Tonight was a fantastic evening and celebrated the players and staff amazing efforts during my first season in charge.

“I would also like to thank Vitality for sponsoring tonight’s awards evening as they made it a really special occasion for all those in attendance."

Neville Koopowitz, CEO at Vitality, said: “Our congratulations go to all the winners. We believe in the power of sport to help inspire people to live a healthy life and we’re very proud to support Liverpool Ladies FC who personify the sporting values we admire.”