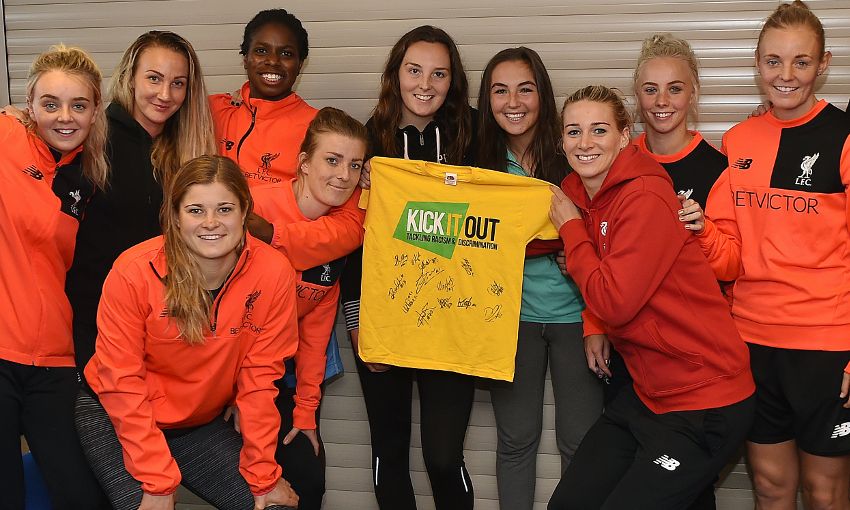 Gemma Bonner on season finale and rewarding the fans

Liverpool Ladies were paid a special visit by Kick It Out last week as football's equality and inclusion organisation delivered a talk to the Women's Super League side.

Kick It Out (KIO) has worked closely with the club for a number of years and focuses on promoting the message of equality, inclusion and anti-discrimination.

Paul Mortimer, KIO professional players engagement manager, conducted the workshop and discussed the importance of raising awareness of equality on and off the pitch.

Ladies manager Scott Rogers said: “It was a delight to welcome Paul Mortimer to deliver the Kick It Out workshop.

“We as a club fully support Kick It Out and understand the importance of raising awareness of all forms of discrimination – not just in football, but in life in general.

“The workshops raised the players’ awareness of equality and anti-discrimination, which further highlights how beneficial these workshops are for the players.”

Following on from the workshop, the Reds will also wear Kick It Out T-shirts for the final game of the season against Arsenal Ladies this Sunday, at the Select Security Stadium in Widnes.

Mortimer said: “A key part of our visits are to raise awareness of what Kick It Out stands for and the work we do – it’s vital we educate the players about what we’re trying to achieve.

“We try to organise as many of these sessions as possible with Premier League, English Football League and FAWSL clubs throughout the season.

“Liverpool FC are receptive to accommodating these sessions and we’ve been to visit the club for the last few years. This is a fantastic opportunity for the players.”