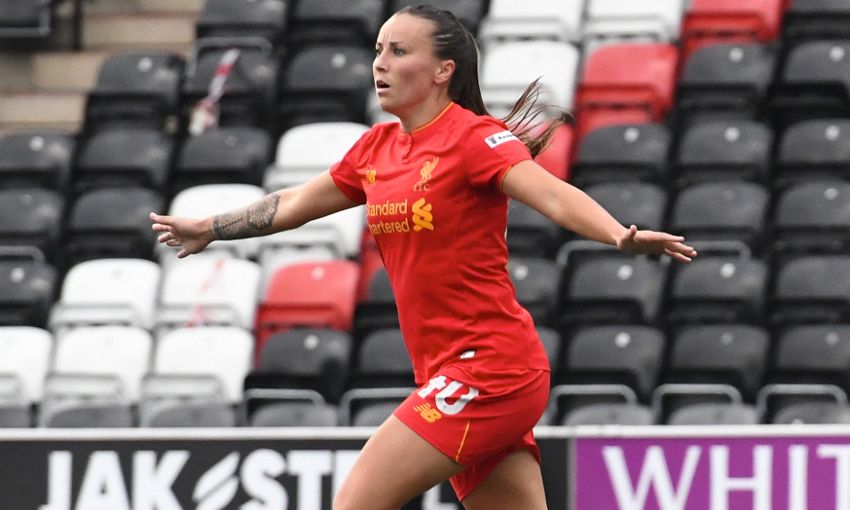 Pick up a Ladies programme at Doncaster Belles clash tonight

Natasha Harding scored a superb goal as Liverpool Ladies recorded a 1-0 win over Doncaster Belles at the Select Security Stadium in Widnes on Saturday evening.

The only goal of the game arrived just into the second half, when the Welsh forward struck a brilliant effort beyond the reach of Nicola Hobbs into the back of the net.

It was a deserved victory for Scott Rogers' charges and a great way to bounce back from the heartbreak of the Continental Cup quarter-final exit at Birmingham.

It's now seven WSL games unbeaten for the Reds and they are showing great signs of progress under Rogers.

Liverpool Ladies made a lively start and came so close to an opener when Shanice Van De Sanden was denied at close range by Hobbs.

The visiting stopper was having an inspired night and she pulled off three great saves to deny Sophie Ingle, Harding and Van De Sanden again.

At the other end former Red Katrin Omarsdottir went close with an effort that brought a superb save from Siobhan Chamberlain.

After a goalless opening half Liverpool Ladies made the breakthrough their play deserved when Harding finally got the better of Hobbs.

Liverpool Ladies had further opportunities to extend their lead but just couldn't find a second goal, while at the back captain Gemma Bonner, Ingle, Satara Murray and Mandy Van Den Berg were outstanding as they kept the opposition attack at bay.

After this superb victory Rogers and his squad now will look forward to training at Anfield in front of the fantastic new Main Stand on Monday.