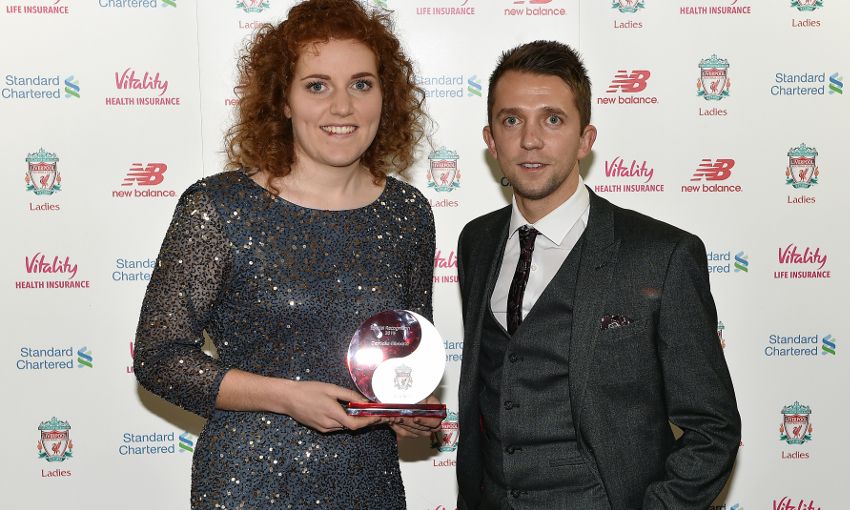 Liverpool Ladies held their annual Player of the Year awards dinner at Anfield on Friday evening.

Vitality, the official wellness partner of Liverpool FC, hosted the night’s proceedings in the prestigious Champions Suite at the stadium.

Danielle Gibbons was presented with a Special Recognition award from Liverpool Ladies manager Scott Rogers, after her emotional return to football following a benign brain tumour earlier this year.

Dowie also received the award for Goal of the Season following her stunning strike away to Sunderland in August, and Becky Easton was voted Vitality Player of the Year – which takes into consideration an individual’s high fitness levels, staying active inside and outside of football, as well as maintaining a healthy lifestyle.

On winning the award, fan favourite Easton said: “It is a real honour for me to be named the Vitality Player of the Year for 2015.

“This award really means a lot to me as being recognised for my professionalism and lifestyle off the pitch is something that I am extremely proud of.”

Vitality, the health and life insurer that rewards healthy living, is promoted in a variety of ways by the club, including pitchside advertising, branding of the medical staff’s clothing and logo positioning on the Liverpool Ladies’ kits.

Neville Koopowitz, CEO at Vitality, said: “This was a fantastic event and our congratulations go to all the winners.

“We believe in the power of sport to help inspire people to live a healthy life and we’re very proud to support Liverpool Ladies FC, who personify the sporting values we admire.”

Ladies manager Rogers said: “Tonight was a brilliant evening and was a great way to thank the players and staff associated with Liverpool Ladies FC for their hard work over the course of the season.

“I would also like to thank Vitality for sponsoring tonight’s proceedings as they made it a special occasion for all those in attendance at Anfield.”