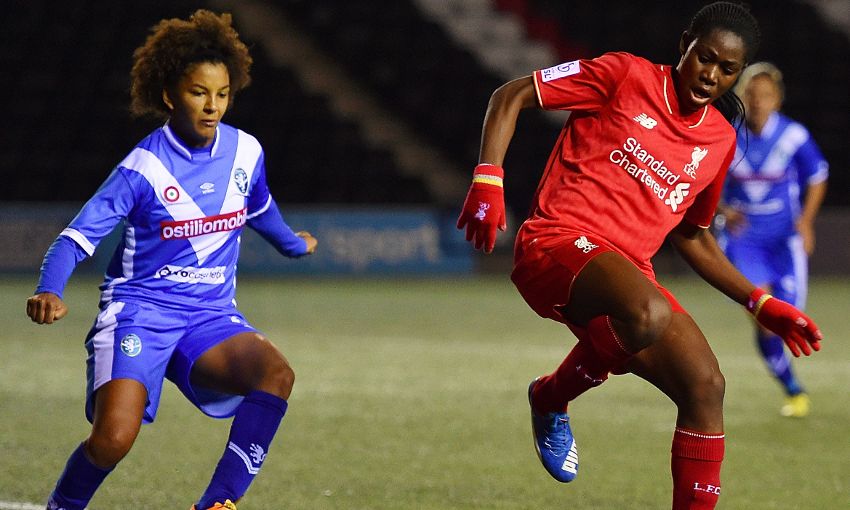 Get your special Ladies CL programme

There was disappointment for Liverpool Ladies on Wednesday night as a 1-0 home defeat by Brescia brought elimination from the Women's Champions League in Matt Beard's final match as manager.

The Reds entered the second leg of their last 32 tie requiring a victory following a 1-0 loss in the opening encounter in Italy a week ago.

But a strike midway through the first half from Barbara Bonansea halted the hosts’ lively start and prevented Beard from bidding farewell with an occasion to remember.

The first genuine opportunity of the evening fell to Asisat Oshoala in the 20th minute.

A long ball forward was neatly flicked into her path by Natasha Dowie and the midfielder’s strength created space inside the opposition area for a shot, but the effort on the bounce was skewed over the crossbar.

And Beard’s team were very quickly made to pay by their Italian visitors.

Daniela Sabatino robbed Martha Harris in Liverpool territory and surged forward, drawing the defence out before slipping an inviting pass into the run of Bonansea. She was clinical in instantly sending the ball inside the near post, away from the reach of Libby Stout, to open the scoring.

The away goal considerably increased the challenge already facing the Reds, who now needed three in response to secure progress to the next round.

Luck continued to desert the Ladies as the interval approached, with Katie Zelem denied what seemed a certain penalty when her goalbound volley from the edge of the area was blocked by the arm of Roberta D’Adda.

The hosts kicked off the second half with intent, eager to sway the momentum, and Oshoala dragged a low attempt wide to the left after a corner into the Brescia box bobbled out.

Next, Zelem teed up Ashley Hodson in shooting range in the left channel, but she hesitated enough to allow a defender to recover and take the sting out of her shot.

The No.36 was frustrated again seconds later when Rosie White found her clean through, but a sliding tackle ruined the finish and the loose ball was cleared away from the goalline.

Fara Williams returned from injury as a substitute with 20 minutes left to produce a comeback, which may have started had Oshoala’s header into the back of the net not been surprisingly ruled out for offside.

But it wasn’t to be for Beard and his team, with Brescia advancing courtesy of their 2-0 aggregate win and the Ladies boss now setting off for a new chapter in Boston.