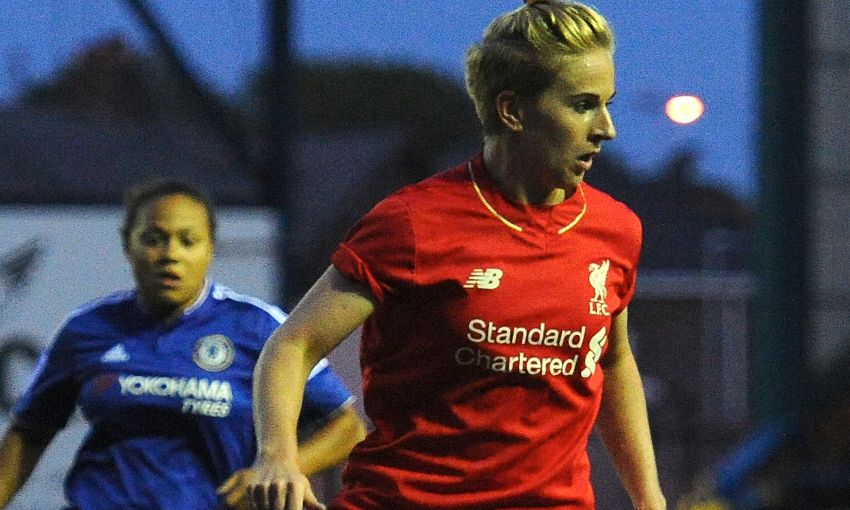 Don't forget to get your Ladies Chelsea programme

It was a frustrating evening in front of goal for Liverpool Ladies as Chelsea took a giant leap towards the Women's Super League title with a 4-0 win at the Select Security Stadium on Sunday night.

The Londoners were clinical with South Korea international Ji So-Yun the main instigator as she netted twice and caused the Reds backline a lot of problems.

It wasn’t the fairytale ending for manager Matt Beard who was taking charge of his final home league game before his move to America to join the Boston Breakers, but his reign with Liverpool Ladies could still end with a trophy before the season is over.

There is still the Continental Cup semi-final and a Champions League tie with Brescia to look forward to and Beard was boosted by the return to fitness of Asisat Oshoala and Becky Easton who both took their place on the bench.

With Manchester City beating Bristol Academy 6-1 earlier today to go top of the table the pressure was on Chelsea to regain the advantage ahead of next weekend’s final day, and they didn’t disappoint with a ruthless attacking performance.

Liverpool Ladies started quite brightly and almost found an opening inside five minutes. Dowie battled hard for possession down the left, Ingrid Ryland played a superb ball through to Line Smorsgard, but the Norwegian’s first touch let her down as Chelsea stopper Hedvig Lindahl got to the ball first.

On 15 minutes a poor clearance from Libby Stout gave Chelsea striker Eniola Aluko a great chance, but the goalkeeper made up for her error by diving full length to make a superb save.

Chelsea stepped up the pressure on 25 minutes when Aluko broke clear down the left flank but her dangerous cross was superbly cut out by the alert Satara Murray.

Two minutes later at the other end of the field, Ryland set off on a superb run and she was so unlucky to see her curled effort come back off the post.

The woodwork was again to deny the Reds seconds later when Gemma Bonner headed against the bar from a corner.

It was tough luck on Beard’s charges because Chelsea took the lead on the half-hour mark.

Former Reds winger Gemma Davison did superbly down the right, and her cross found So-Yun who produced a brilliant first touch before firing an emphatic finish beyond the reach of Stout.

To their credit Liverpool Ladies kept up their attacking intent and Katie Zelem let fly with a 25-yard drive that was brilliantly saved by Lindahl.

Five minutes before the break Chelsea took a big leap towards the WSL title when England striker Fran Kirby netted from close range after great work from Aluko down the right.

On 54 minutes Chelsea made it 3-0 when Murray was caught in possession and Aluko ran clear to fire past Stout.

Beard’s charges refused to give up and on the hour mark Smorsgard ran clean through but her finish was wild as the ball sailed over the top.

Martha Harris then set off on a brilliant run down the right, and when she picked out Rosie White the New Zealand ace drove her effort narrowly wide.

Nigerian star Oshoala made her return from injury as a substitute for the final 14 minutes of the game and that is a major boost for the team with much still to play for in the campaign.

Chelsea made it 4-0 on 78 minutes when So-Yun scored her second goal of the game from close range, after great work down the left from Davison.

The game ended with Stout requiring lengthy treatment after a nasty fall, and Beard will be hoping his last line of defence will be okay ahead of the cup ties that lie ahead.

Beard’s charges end their Women’s Super League next Sunday with a trip to Bristol Academy.