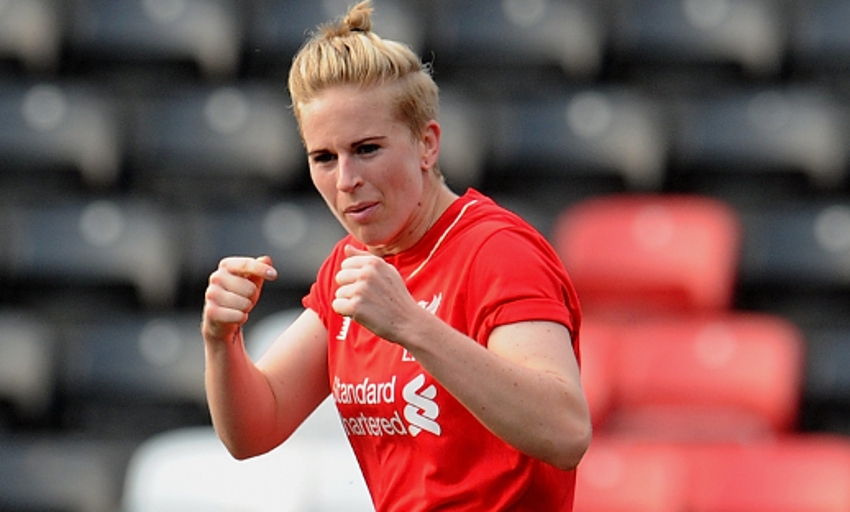 Natasha Dowie scored all four goals as Liverpool Ladies marched into the semi-finals of the Continental Cup after a 4-1 win away at Bristol Academy on Sunday afternoon.

Going into the game on the back of successive defeats by Arsenal and Manchester City in the Women’s Super League, Matt Beard’s sided responded magnificently with a brilliant display.

Dowie has now fired nine goals in just six Continental Tyres Cup games, and the hunt for silverware this season is very much on.

Beard’s side started really well in the clash at the Stoke Gifford Stadium, and New Zealand international Rosie White had two good early chances, but the striker could only fire wide on both occasions from close range.

Dowie then went close when she connected with a superb cross from Martha Harris, but Bristol stopper Mary Earps made a fine block.

At the other end Libby Stout showed her class with a stunning save to deny Christie Murray. It was to prove a vital stop as minutes later the Ladies took the lead.

Kate Longhurst was upended in the penalty area and Dowie smashed home the resulting penalty.

However, the lead didn’t last long and Jade Boho-Sayo fired the home side level with a low strike from 20-yards out.

Just before the break Dowie had a great chance but could only slice her effort just wide after a superb move involving Katie Zelem, Katrin Omarsdottir and Lucy Staniforth.

Beard’s charges took the lead 12 minutes after the restart with goal machine Dowie again on the mark.

Ingrid Ryland, back in the XI, provided the assist and the No.9 made no mistake from close range.

Back came the home side and Stout had to be at her best again as she somehow kept Caroline Weir’s goalbound effort out.

Dowie wasn’t to be denied her hat-trick though and it arrived courtesy of a precise pass from White, and the striker buried the ball beyond the reach of Earps.

The Ladies could have easily added more goals before the end.

Zelem came close to making it 4-1 with a drive from 20-yards that came back off the bar, Dowie also hit the woodwork and Earps made a brilliant save to deny White.

In stoppage time Dowie raced onto a through ball and netted again as the deadly striker made it 4-1.

Overall it was a superb display by the Ladies and as manager Beard said in the build-up you never write this team off.