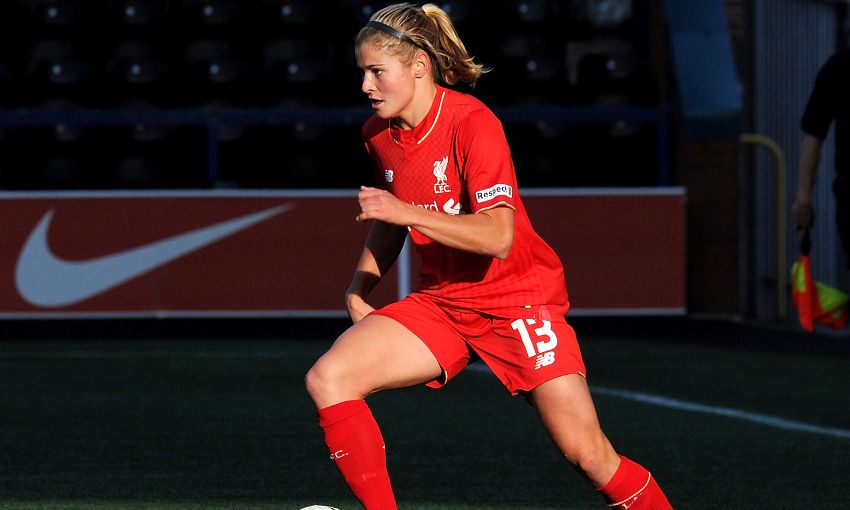 Liverpool Ladies suffered a blow to their hopes of a top-two finish in the Women’s Super League after they lost 2-0 to Arsenal at the Select Security Stadium in Widnes on Saturday.

Visiting goalkeeper Sari Van Veenendaal was the big factor in the away side taking the crucial three points as she denied the Reds time and time again.

Going into the game, Liverpool Ladies boss Matt Beard was without the influential Becky Easton who is out with a broken arm, sustained at Manchester City last weekend, but the manager was able to welcome back Satara Murray into his starting line-up as the American partnered Gemma Bonner at the centre of the defence.

Back in July the Ladies had produced a superb performance to sink Arsenal 3-1 and Beard was hoping for a repeat display on Saturday evening.

In the opening minute a superb pass from Katie Zelem sent Natasha Dowie racing clear down the right, but after cutting inside the penalty area the No.9 fired just wide of the target.

Murray was then shown a yellow card for a clattering challenge on the halfway line.

Arsenal were very dangerous on the break and on 20 minutes Libby Stout had to be at her best when she held on to Alex Scott’s stinging drive, after good approach play down the right flank from Danielle Carter.

Three minutes later another superb cross from Carter caused problems, and when the ball fell kindly to Spanish forward Natalia on the edge of the box, she curled the effort just over the bar.

On the half hour the Ladies went close. Dowie did superbly well to pick out Rosie White whose curled effort was well held by Dutch international Van Veenendaal.

New Zealand star White, who plays on the left-side of the attack, is a very clever player and after spotting the visiting goalkeeper marginally off her line, was so unlucky when her attempted lob from 40-yards out dipped just over the bar.

Four minutes before the break Arsenal missed a golden chance to take the lead from the penalty spot. Murray tripped up Scott, but Natalia could only send her effort wide of the target.

A minute after the break Stout produced a brilliant save to keep out Marta Corredera’s deflected effort.

On 55 minutes Liverpool were desperately unlucky not to score. Bonner saw her goalbound effort somehow kept out by Van Veenendaal, and from the resulting corner Ashley Hodson’s effort was brilliantly saved by the heroic Arsenal stopper.

Then at other end Carter broke through after a mistake from Maz Pacheco but her curled effort just cleared the bar with Stout beaten.

The away side took the lead on 65 minutes when Dominique Janssen curled home a superb free-kick beyond the reach of Stout from 20-yards out.

Straight from the kick-off substitute Lucy Staniforth was so unlucky when her attempted long-range effort almost found the net but the outstanding Van Veenendaal palmed the ball over the bar.

Martha Harris almost broke through on a superb run into the penalty area, but the full-back was denied by another excellent block from Arsenal’s Dutch goalkeeper.

With the Reds pushing hard for an equaliser there was always the danger of being caught on a counter-attack, and the Gunners made sure of the three points 10 minutes from time when Jordan Nobbs converted a right-wing cross from close range.

With an away date at Manchester City on Thursday followed by the Continental Cup quarter-final away at Bristol Academy next Sunday, Beard will be hoping his charges can bounce back in style.