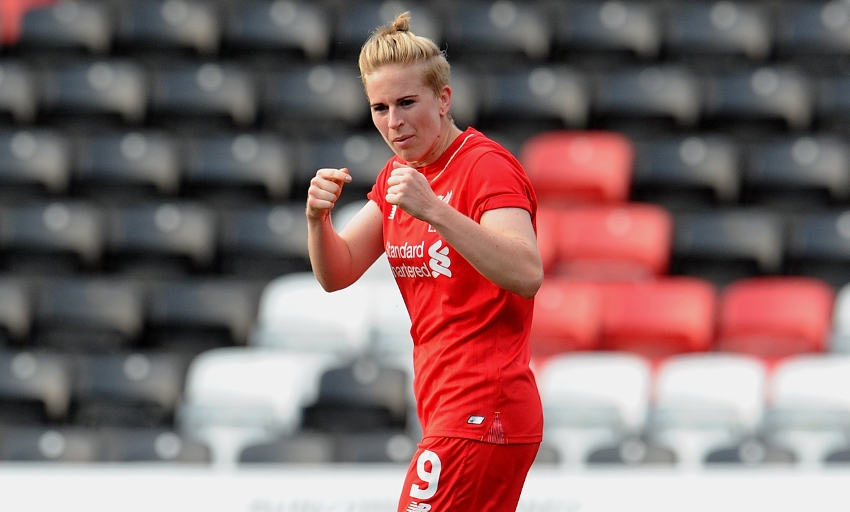 Natasha Dowie scored twice as Liverpool Ladies got back to winning ways in the Women’s Super League after a 2-0 win over Bristol Academy at the Select Security Stadium on Saturday night.

Matt Beard received a pre-match boost when Kate Longhurst was able to make the starting XI after recovering from the knock she picked up during the Continental Cup win over Durham last weekend, while Dowie and Rosie White resumed their partnership in attack.

The Ladies made a bright start and after just four minutes free-kick specialist Lucy Staniforth was unlucky when her set-piece was well saved by Mary Earps as she pushed the ball away for a corner.

Beard’s charges opened the scoring on 16 minutes and it was no surprise the goal came from Dowie, who took her tally to six goals from her last six games. Ashley Hodson was the creator with a great run down the right and her cross was met by Dowie at the back post for a tap-in.

Despite their lowly position at the bottom of the league Bristol didn’t lose heart and they came close on 26 minutes when Christie Murray’s effort was well held by Libby Stout.

Then a minute later Stout had to be on alert again when she darted from her line to block out Jade Boho-Sayo who was breaking through on goal.

Two minutes from the break Dowie almost made it 2-0 but Earps was the obstacle as she denied the No.9 at point blank range.

At the other end Murray broke clear but Stout was on hand to make a brilliant save to preserve Liverpool’s lead.

Beard made a tactical switch for the second-half with fit again Satara Murray replacing Longhurst.

The half became a bit of a midfield battle but the Ladies were always dangerous on the counter-attack.

One or two debatable offside calls denied Dowie and Hodson when they were played clean through on goal, and only a horrible bounce denied the No.9 when a superb pass from Katie Zelem put her clear of the Bristol defence.

It was 2-0 and game, set and match on 70 minutes and again it came through the same combination. It owed much to a brilliant run down the right from Hodson and Dowie was on hand to fire her cross into the back of the net.

Hodson was unlucky not get the goal she deserved five minutes from time but Earps made another great save to keep out her close range effort.

After three games without a win in the league this was a much needed three points and thoroughly deserved.