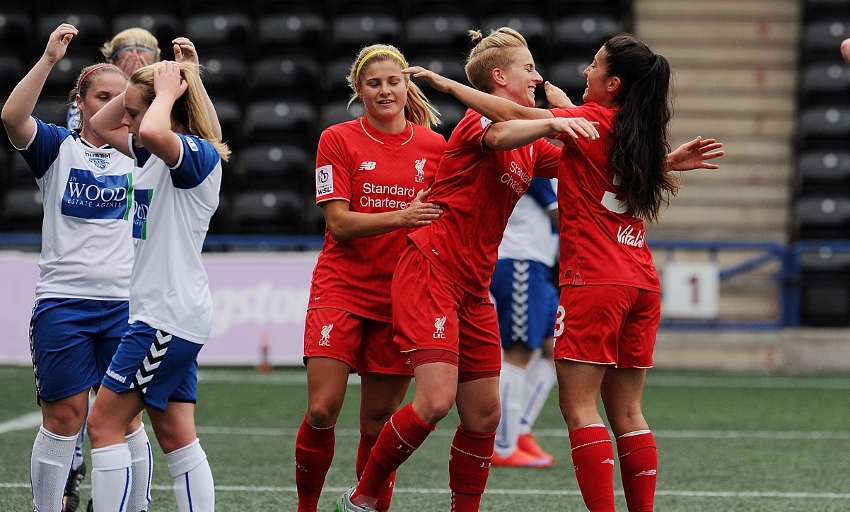 Get your new Ladies programme

Natasha Dowie came off the bench to fire the winner as Liverpool Ladies kept up their 100 per cent record in the Continental Cup with a 1-0 win over Durham at the Select Security Stadium on Saturday night.

After victories over Everton and Doncaster Belles, Matt Beard's team recorded another crucial victory as they put themselves in a great position to reach the quarter-finals.

The Ladies dominated the game and the scoreline could easily have been a significant one, had it not been for a truly inspiring display from Durham stopper Anna Moorhouse.

With an important Women’s Super League clash with Bristol coming up next weekend Beard chose to rotate his squad.

Strike duo Dowie and Rosie White were given a rest on the bench, Katie Zelem and Ashley Hodson were given starting berths and there was the welcome sight of Satara Murray on the bench after her recent injury.

Liverpool Ladies started the game in lively fashion, passing the ball with precision from left to right, and they came close to an opener after seven minutes. Hodson broke clean through after charging through the Durham defence, but could only fire wide of the target. It was a great chance.

Hodson was causing all sorts of problems down the right flank and another run and cross ended with Kate Longhurst’s goalbound shot being deflected away to safety.

Beard’s charges continued to dominate possession for the rest of the half but the Durham defence stood firm as the Ladies looked to get the vital opening goal.

On 24 minutes Line Smorsgard was unlucky when she connected with a Katrin Omarsdottir cut-back but Moorhouse made a good stop to keep out the effort.

On 32 minutes Longhurst then cut inside and saw her effort well saved by Moorhouse, and Lucy Staniforth then had a case of misfortune when her brilliant 30-yard free-kick came back off the bar.

On the stroke of half-time Smorsgard was desperately unlucky when she produced a great turn and guided an effort inches past the post.

The Ladies continued to keep up their pressure in the second half and captain Gemma Bonner was unfortunate when her low drive was superbly kept out by Moorhouse.

Frustrated with his side’s finishing in front of goal, Beard turned to Dowie and White as he made a double substitution with the pair replacing Smorsgard and Omarsdottir.

Dowie almost scored with her first touch a minute after entering the field, but the inspired Moorhouse was the obstacle again as she palmed her goalbound effort over the bar.

Two minutes later a superb pass from White put Dowie clear, but again Moorhouse was unbeatable as she made a brave save.

Dowie wasn’t to be denied though and the predatory No.9 broke the deadlock on 66 minutes when she slotted home from close range after superb play down the right from Hodson.

Moorhouse then produced several more outstanding stops to keep out Hodson as Beard’s team searched for more goals and White drilled a shot onto the bar.

There was another injury worry for the Ladies when Longhurst had to be helped off the field after a fall in the penalty area and Beard will be hoping his No.7 can make a quick recovery for the crucial fixtures that lie ahead.