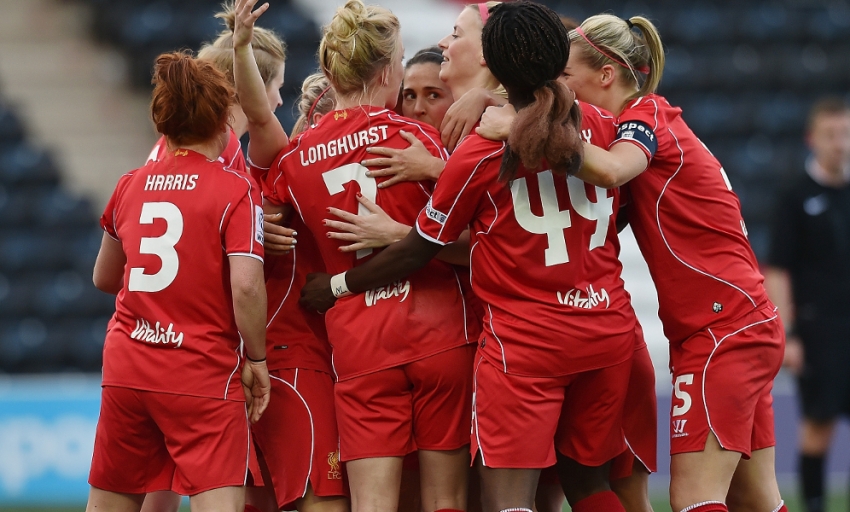 Line Smorsgard fired her first goal in a red shirt as Liverpool Ladies produced a superb performance to beat Manchester City 2-1 at the Select Security Stadium in Widnes on Sunday evening.

The Norwegian forward got her head to an Asisat Oshoala cross to seal a fine victory for Matt Beard's side.

After her nomination this evening for the BBC Women's Footballer of the Year award, Oshoala had an inspired game as besides the assist she netted the opening goal.

Following last week's rather unjust defeat by Chelsea, Beard's side showed they are not ready to give up their Women's Super League title without a real fight.

Before kick-off the teams observed a minute's silence to mark the forthcoming 30th anniversary of the Bradford City fire disaster.

Beard welcomed Icelandic midfielder Katrin Omarsdottir back to his squad for the first time this season after injury as she started on the bench, while former Red Lucy Bronze was in the City team.

The away side made a bright start, with the pace of Nikita Parris causing danger. A foul on the on-loan Everton forward on three minutes resulted in a free-kick, but Jennifer Beattie's fierce 22-yard drive was well held by Libby Stout.

Liverpool then began to find their stride, with Oshoala a real threat on the counter-attack.

On nine minutes Fara Williams delivered a superb ball into the box from the right but, with no red shirt able to make a telling contact, it was deflected just wide for the corner which produced the opening goal.

Williams curled in the ball from the left flank and after a goalmouth scramble Oshoala pounced to score.

With captain Gemma Bonner and Satara Murray rock-solid at the back and the assurance of Becky Easton playing just in front of the backline, Liverpool did well to contain City's counter-attacks.

The away side had a decent chance on the half-hour mark but England forward Toni Duggan fired wide from the edge of the penalty area.

City drew level after 53 minutes. Isobel Christiansen's right-wing free-kick found the head of Parris, who powered the ball beyond the reach of Stout into the bottom corner of the net.

A minute later the away side should have scored again but Christiansen blazed over the bar when the ball fell kindly to her on the edge of the penalty area.

However, Beard's side roared straight back into the lead on 57 minutes when Oshoala's pinpoint cross from the right flank found Smorsgard to head home her first goal in a red shirt to make it 2-1.

There was a blow for the hosts on the hour when influential German left-back Corina Schroder picked up a knock and was replaced by Ingrid Ryland.

Smorsgard was now full of confidence after her goal and, on 63 minutes, Liverpool nearly scored what would have been a goal to remember. Smorsgard found Williams, who played a superb one-two with Oshoala, but the England midfielder's effort went straight into the arms of Alex Brooks.

Shortly after, the Reds went so close again. Williams' free-kick was fumbled by Brooks, who then produced a brilliant double stop to deny Natasha Dowie and Oshoala.

With Williams, Easton and Oshola on the top of their game and Bonner truly inspirational at the back, Liverpool continued to create good chances as they looked for a third goal to secure the points.

A superb run down the right from Martha Harris saw her telling cross find Smorsgard at the back post, but the No.10 fired just off-target.

Dowie then charged down a clearance and set off towards goal, but as the No.9 cut inside her shot was well held by Brooks.

Parris missed a great late chance for City when she ran clear but could only strike wide of the goal.

The final whistle confirmed a big win for the Ladies and one that was thoroughly deserved.

Get your Ladies programme now