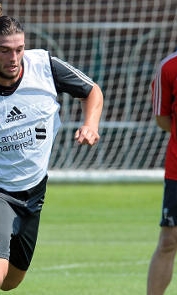 Darren Burgess admits he was thrilled with the condition of the Liverpool players who returned to Melwood following the summer break on Monday.

Each member of the Reds' playing staff was issued a specially-prepared fitness programme to follow over their holidays to ensure they came back to the club's training base in good condition - and the players appeared to be in fine shape as they got their preparations for 2011-12 up and running.

"It was a pretty hard session on Monday. We certainly put them through a tough session, especially early on - but the boys handled it pretty well. Better than I thought they would, actually, which is good.

"They did a football-fitness circuit, where they combined a little bit of running with a little bit of football. There was a little bit of passing, but mainly a fair bit of hard work and then they did some possession drills with the coaches after that.

"We gave them a couple of weeks off at the end of last season and then they all had individual programmes to follow, which included a bit of running, a bit of gym and some injury prevention work. Based on training, I would say they've all carried out those programmes.

"It's massive that they look after themselves over the summer. The Premier League is getting quicker and quicker and we only have a six-week pre-season to try and get the players from a base level to a level where they can compete in the Premier League, so they needed to do some work during the off-season - and they certainly did that."

A little over six weeks had passed since the final day of the 2010-11 season before the Liverpool players were being put through their paces at Melwood once again.

They'll now spend the next half dozen weeks undergoing meticulously prepared training sessions to ensure they're in prime condition by the time Sunderland visit Anfield on August 13.

Burgess explained: "The players finished their session on Monday morning, had some lunch and then spent the afternoon doing some medical, physiotherapy and fitness screening, so we'll know by the end of today exactly where each player is at and then we can work out their programme based on it.

"We pretty much want to predict what the players are going to do at the end of each week so we can make sure they're on track and ready for pre-season, so as you can imagine that takes a fair bit of planning."

He added: "We have the whole of pre-season planned - in theory of course. It doesn't always work like that because numbers of players change and coaches often change sessions based upon what they've seen the week or day before, but in theory we have got everything planned up until we play Sunderland."

Watch our chat with Burgess now 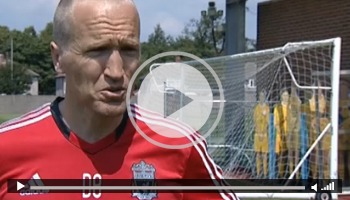 Liverpool will spend the week at Melwood before departing for Asia to embark on their tour of the Far East.

Burgess and his staff are planning to get as much hard work done as possible in the milder Merseyside climate before they land in what is likely to be a hot and humid China next week.

He said: "It will be a very tough week this week. When we go to Asia it will be quite warm and the humidity will be quite high, so it will be harder to get a lot of work in when we're over there, so we want to make sure we get a fair bit of work in at Melwood before we head over."

Burgess and co had virtually a full squad to work with on Monday, a contrast to last summer when the players' return to Melwood was staggered due to the World Cup.

However, while the likes of Luis Suarez and Lucas Leiva may be in Argentina, they are still in daily contact with Liverpool's medical and fitness teams keeping them up to speed with the work they're doing with their countries.

"The squad we took to Bad Ragaz (Switzerland) last year compared to what we've got here and the quality of football we've seen is excellent," said Burgess. "Even Luis Suarez and Lucas are sending me information daily on what they're doing with their teams.

"It's important to keep in touch with them. Like I said, they're sending daily information and we'll try and make sure they can get some downtime whenever they can as well because they are going to be pretty important for us for the season.

"I am excited about the new season. There is a really good feel about the place. We've got a new coach in (Kevin Keen) and it's definitely exciting to be here."