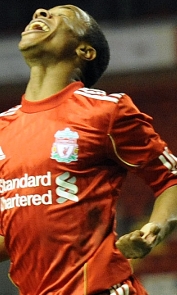 Liverpool's Under-17 youngsters will be looking to impress again for England when they take on Canada in their second game of the FIFA World Cup in Mexico tonight.

Fresh from a 2-0 opening day victory over Rwanda, which included a sensational strike from Raheem Sterling, John Peacock's men will be hoping to book their place in the knock-out phase of the competition by collecting another three points.

Sterling was the standout Liverpool performer against Rwanda on Sunday evening while full-back Brad Smith also impressed at left back and is expected to be included in the starting eleven once again if he shakes off the ankle injury which forced his withdrawal in the second half.

Matty Regan, Adam Morgan, Jack Dunn and Tyrell Belford complete the Anfield contingent in the England squad for tonight's game, which kicks off at midnight (BST).

With group leaders Uruguay lying in wait in their final game, Peacock is keen to ensure the focus for now is solely on the test presented by the Canadians.

"We won't be looking past Canada that's for sure," said Peacock.

"My full concentration will be on Canada and making sure the players are prepared as best as possible and we win the game.

"Canada have many good qualities and have a fantastic team spirit, so we will have to play very well to win the game.

"In my experience winning the first game is also very important, so I'm glad to say we did that and we did that very well.

"But that doesn't mean it will get easier from now on, Canada will be a very difficult game and we will have to play like we did against Rwanda to qualify for the latter stages of the competition."