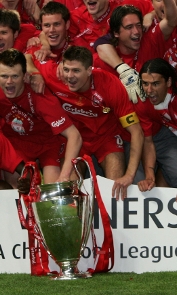 We asked supporters on Twitter to sum up what Istanbul means to them, six years to the day when we produced an incredible comeback to win the Champions League in Istanbul. Here are 10 of the best tweets.

@Mike_Carter001: Has to be Gerrard and Carragher lifting the Champions League trophy whilst doing the tune to ring of fire.

@DannyGee15: Jerzy's save from Sheva at close range. I said to my lad, we've won this now, that's it. Talk about emotional night!

@ChrisMAllen1982: My greatest memory was holding my son up,who was exactly 1 week old, and showing him Steven Gerrard lifting the Trophy.

@Fowler90: I remember my little brother making fun of me at half time. He supports Man U and he was in tears by the end of the game.

@jaycon2009: was such an immense night, but dudek saving that last penalty was just a moment I will never forget!

@gregdymond: simple really, you'll never walk alone at half time. Raised the hairs on the back of your neck.

@mw4reds: At the end of a storm, there's a golden sky! 6 yrs ago today LFC convinced me that Miracle do happen if u keep ur faith in Reds.

@rachthered: YNWA being sung, that seemed to change everything, the most historic comeback in football.

@Ren_Egade: Best memory of Istanbul is Gerrard scoring & has he runs back, he is signaling to the fans let's go, like he knew what was coming.

@IanpParr: Telling the bloke next to me to open his eyes to watch the penalty, then a split second of guilt followed by massive cheer!

Click on the play button below to watch how we won European Cup No.5 in five minutes 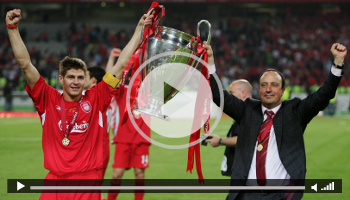