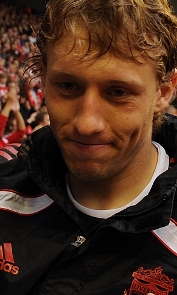 We asked supporters on Twitter to sum up Lucas Leiva in 140 characters after he was voted Standard Chartered LFC Player of the Season. Here is what they came up with...

@James_Herd: Robbie Savage once said he was better than Lucas. Wonder how he feels now? Brilliant season for the young Brazilian.

@Joescouse_lfc: If Lucas improves season on season as much as he has this year, he will be the best midfielder in the world by 2013

@RedPMcG: Fantastic role model for kids! when things arent perfect, dont sulk, work hard and you will reap the rewards

@tomlofthouse: Changed the Kops opinion of him, classy player and if it wasn't for some of his performances (CFC away) then God knows!

FREE: Click the image below to watch Lucas recieve the award 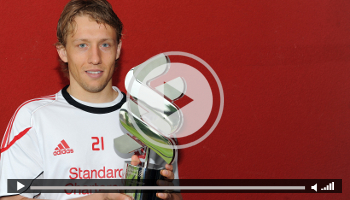 @ JayZA_: I was never a huge Lucas fan, but this last season my opinion has changed drastically! He works harder than Sir Alex Fergusson's Jaw!

@joel_hewitt: Lucas has taken the reins left from Xabi and has developed into the most technically gifted and consistent midfielder in the league.

@johnny_chapman: first on team sheet, a lot like didi hamann, unspectacular but we would really notice if he was missing.

@jayshizzle: he has the odd good game, he's actually not bad, he's quality, he's undroppable, hes player of the year