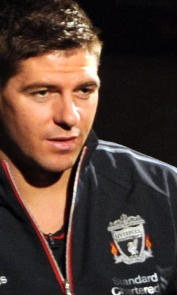 Steven Gerrard is determined to reach his peak form when he returns from injury next season and he's thrown the gauntlet down to his teammates to be good enough to keep him out of the side.

Gerrard, who turns 31 next week, has been injured since the start of March but his rehabilitation work has left him confident he can once again be the inspirational captain fans have enjoyed watching for over a decade.

Speaking exclusively in LFC Weekly this week, the No.8 denies he might have to adapt his game any time soon to extend his career at the top.

"Maybe one day but not now. I'm not at that stage yet," he said. "I want to come back as the player I've always been and perform to the levels that I've reached before.

"After the operation I feel in the best shape I've been in for two or three years. I'm stronger, I'm lighter and I've got a lot more confidence about my body generally. Changing isn't on the agenda."

Having been out for a decent spell and with a new management team in place, does Gerrard feel he'll have anything to prove to Kenny Dalglish?

"Everyone will need to prove themselves and I am no different," he says. "At Liverpool, you're always proving yourself - it never stops because it's the Liverpool way. It's the manager's decision who to pick.

"All I can do at the moment is get my rehab done and come back with my body right, hungry, rested up and ready to go. The challenge is for the other players to keep me out of the team. I'm all for the challenge."

The full Steven Gerrard interview, plus an exclusive with Dani Pacheco and a look back at the 1981 European Cup final, is in this week's LFC Weekly.