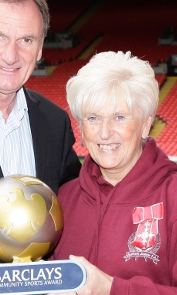 A season's drama in headlines

Liverpool fan Jenny Leyland was celebrating this week after being presented with March's Barclays Community Sports Award by Kop legend Phil Thompson on the hallowed turf of Anfield.

The 63-year-old received the accolade, which is part of the Barclays Spaces for Sports, the Premier League's Creating Chances programme and the Football Foundation, thanks to her work with Sutton Junior Football academy.

Each monthly winner of the prize receives £1,000 for their group or organisation, a limited edition trophy and is entered into the end of season award to win a further £5,000, all donated by Barclays Spaces for Sports. 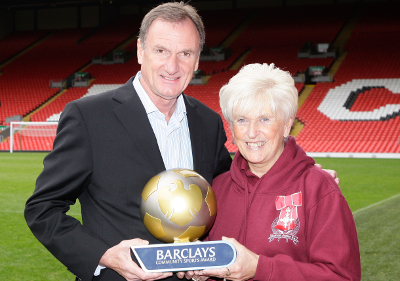 Jenny formed the academy in 2008 by donating £1,000 of her own money after discovering there was no junior football team available in the area for local children.

Since its launch, the academy has gone from having only eight children to an FA Charter Standard club with 50 members that are trained by nine fully qualified coaches.

Despite holding a full-time teaching job, Jenny, who was recently awarded an MBE for her two decades of service to grassroots football, divides her time between the workplace and the academy, offering each new member a thorough health screening.

In addition, she continues to host fund-raising events to ensure that the teams are able to keep training.

As well as allowing the local children to partake in weekly football matches and training sessions, Jenny also pays for enthusiastic members to take their coaching badges and other training through courses at a local college.

Jenny said: "I'm absolutely over the moon to receive this award. I can't thank Barclays Spaces for Sports, the Premier League's Creating Chances programme and the Football Foundation enough for their support.

"This money will go a long way towards kit for the teams and allow me to buy further health screening equipment for our members".

Former England international Gareth Southgate, who is heading up the judging panel for the award, added: "Jenny Leyland has been a real inspiration to the people of Sutton. Her work has been vital for the wellbeing of the young people in the area, and created a place for them to spend their weekends that is both enjoyable and educational.

"The enthusiasm she shows for the Sutton Junior Football academy, and all grassroots football, is superb."